Who will rid me of this turbulent Chief of Staff? 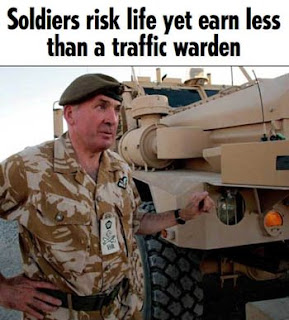 Once again, the Chief of General Staff, General Sir Richard Dannatt, seems to be intent on putting his foot in it. According to The Sun, he is calling for a pay rise for soldiers after "discovering" traffic wardens get paid more than those on the frontline.

He is thus cited as saying, "You look to see how much a traffic warden is paid and compare that against what a private soldier gets paid." This is picked up uncritically by other hacks such as Lucy Cockroft of The Daily Telegraph, who cheerfully copies out the The Sun's figures, telling us that, "The lowest paid soldiers are on just £12,572 a year while traffic wardens receive a basic salary of £17,000."

The operational allowance, paid at a rate of £375 per month, is entirely additional to existing allowances and funded out of the reserve, rather than the defence budget – a payment which, incidentally, was opposed by Dannatt. 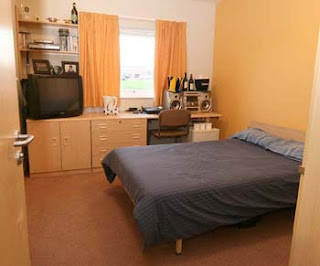 On the other hand, soldiers pay £3.89 charges for meals each day and for accommodation they pay £14 per week for Grade one standard (single, en suite room - illustrated) or £4.76 for Grade 4 (less than a packet of cigarettes). They do not pay for meals or accommodation when on operations. They have no travel costs and get free uniforms (right down to their underpants).

Furthermore, soldiers are on a salary spine which guarantees them annual increments, bringing their pay to £25,181.88 annually after seven years – with additional qualifications. They are also in a hierarchical system where there are good opportunities for promotion. Potentially, they can earn as much as £44,587.80 a year as a WO1, assuming they do not go for a commission, which many do.

Whatever else, soldiers are not badly paid. Taking into account their deductions, they are much better off than many occupations and, at the end of their service, they qualify for a non-contributory final salary pension scheme, plus resettlement bonuses, which is the envy of the private sector.

By contrast, The Sun is being more than a little ingenuous about traffic warden pay. The pay rate of £17,000 cited applies only to officals in London Boroughs - as here - to those with experience, or to supervisors. More typically, the pay rate is £7 per hour - less than £14,000 a year - and some are on the minimum wage. One job, here, in Burnley, is advertised for £5.84 - equivalent to £11,539 a year.

One can, of course, expect crap research out of The Sun and other hacks - and you also expect other brain-dead commentators to pile in, but one would expect Dannatt to know better. What does he think he is playing at?