More on that turbulent CGS 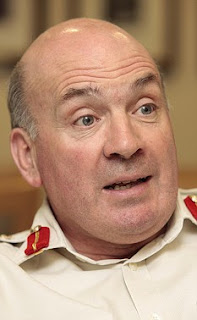 It looks like the Mail on Sunday is climbing on the speeding bandwagon of soldiers' pay, selectively offering quotes from a speech given by defence secretary Des Browne, dating back from last year.

Headed, "Our troops aren't fit for jobs in civvy street, says the man who's meant to be fighting their corner," by Matthew Hickley, the usual tired formulas are applied, with the strap: "Defence Secretary Des Browne faced fresh anger over soldiers' pay last night after suggesting their low wages are justified because many would fail to get better-paid jobs outside the Army."

The speech was at the Royal British Legion's Scottish annual conference last June, when Browne posed the rhetorical question: "Why don't we pay servicemen and women in a comparative rate to uniformed organisations in civilian street?"

Answering himself, he said: "I have to say the honest answer to that, for a number of young people, particularly those who join the Army, before they join the Army, they would not have been accepted by any of these organisations. But, because of the formative experiences the services have been for you, as a result of what you have gone through, you can bet your bottom dollar that when you come out of the Forces, you will be acceptable."

The point itself is quite fair. The Army does take in large numbers of young recruits – especially in Scotland, where Browne was speaking – who lack qualifications, and even basic skills like reading. These youngsters would, under any circumstances, find it difficult to gain employment. The skills and experience – and the discipline – they gain undoubtedly make them more employable and, after leaving the Army, many of them go on to make successful second careers which would have been unreachable had they not joined up.

Nevertheless, the MoS calls in aid the Royal British Legion – which did not comment on Browne's remarks at the time but now finds them "deeply offensive", claiming they portrayed troops as "too dim"” to work as traffic wardens, police or firemen (notwithstanding that many discharged soldiers go on to do those jobs). Thus, we are told, a spokesman for the Royal British Legion Scotland now has it that: "Mr Browne's comments are deeply offensive and could hardly be more insulting."

A much more level approach come from the leader in The Times yesterday – which has actually done quite well on this issue.

It notes that soldiers do not enlist primarily for money: "Challenge, excitement, training, the chance to serve: these are all more powerful reasons for joining up than pay." It also notes that the Army is about 3,500 below strength and has been for years, yet an attempt to boost intake with a generous pay settlement in the past two years has not solved this problem.

Thus, it concludes that the state's failure to honour the service of soldiers is "not in the modesty of pay". Its view is that "the inadequacy of equipment, and the shabbiness of conditions" have a greater impact.

To an extent, that is indeed the case, but there are more fundamental problems. Essentially, the Army – but also the other Services to a lesser extent – are engaged in two demanding counter-insurgency operations, for which none are properly equipped nor structured. This means that the "teeth" arms such as the infantry, are particularly stretched, and in some cases misused. This contributes a great deal to the stresses experienced by individuals.

It is here, interestingly, that the CGS, Richard Dannatt must bear a great deal of responsibility. While his predecessor, Mike Jackson reorganised the Army, eliminating the "arms plot" system, this has not been an unqualified success and the reorganisation was certainly not devised with counter-insurgency operations in mind.

There has been an expectation, therefore, that in his tenure as CGS, Dannatt would come up with a new package, dealing with some of the pressure points, which would also address retention and recruitment issues. Without that, there is very little sense in pushing for simplistic "quick fixes" such as a wage hike – or even mounting a major recruitment campaign.

The problem is that, so far, Dannatt and his staff have so far failed to come up with a convincing plan – or indeed any serious proposals which would merit the description of a plan – which means that inertia grips the Army and small problems are being allowed to escalate.

There is some suspicion, therefore, that Dannatt's latest outburst is more of a diversionary tactic, or a smokescreen to cover up the internal failures of the brass to address the more deep-seated problems afflicting the Army. By going for such a populist and easily understood issue like pay, Dannatt can at one reinforce his easy popularity with junior ranks and establish himself as their champion – in so doing insulating himself from criticism of his own failures.

Crucially, in this sense, Dannatt's current intervention is particularly ill-timed, as the Forces have only just received their last (generous) pay award and consideration of the next is not due for some time. Now, therefore, is not a particularly good time to be lobbying on pay.

This points up what is seen as another defect in Dannatt. Although the CGS is a serving officer, the role is one of a politician in uniform. But Dannatt is very bad a playing the Whitehall game and is largely out of his depth, unable to build the alliances which are necessary for him to promote his (the Army's) agenda. Unable to prevail internally, therefore, he resorts to playing the "media card", unaware (or unwilling to admit) that this ultimately damages rather than advances his cause.

Given our (largely) venal and superficial media, however, he can always rely on a few cheap headlines to bolster his position – temporarily. But the tragedy is that his grandstanding is obscuring the more fundamental problems and the lack of progress in fixing them. Had we a more diligent media, this would become evident but, as long as they too are only interested in cheap headlines, a rather inadequate CGS can find a ready audience.

But, make no mistake, for all the plaudits, Dannat, the "Forces' Champion" is not doing his people any favours – and neither is he serving the nation's interests.