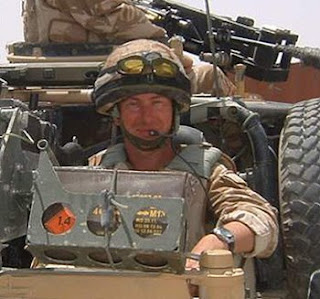 By the end of this month, less than ten days into our journey, the number of British casualties in Afghanistan has increased to 110, reported as the highest number of British deaths in the land campaign in any one month, since the start of operations in 2002.

Despite that, Gerard Baker of The Times wrote a bullish column telling us to: "Cheer up. We're winning this War on Terror". Covering both the Iraqi and Afghani campaigns, he breathlessly announced that Al-Qaeda and the Taleban were "in retreat", the surge had worked in Iraq and Islamism had been discredited.

Quoting the famous words of Marshal Foch at the Battle of the Marne: "My centre is giving way. My right is in retreat. Situation excellent. I shall attack!", all that was needed, opined Baker was for our political leaders and opinion-formers to display just "a hint of the defiant resilience that carried Marshal Foch to victory".

The problem was, according to Baker, was that "timorous defeatism is on the march." In Britain, setbacks in the Afghan war were greeted as harbingers of inevitable defeat. In America, large swaths of the political class continues to insist Iraq is a lost cause. The consensus in much of the West is that the War on Terror was unwinnable. The answer, therefore, was "confidence".

Concluded Baker: "We are prevailing in this struggle. We know it. And everywhere: in Afghanistan, in Iraq, and among Muslims around the world, the enemy knows it too."

With the analysis so far done on this blog, one was minded of the boy who stood on the burning deck, whence all but he had fled – but not in the strict terms of Hemans's poem. Instead, one recalls the cynical rejoinder, oft quoted but with no acknowledged author: "Obviously, he had no idea what was going on". The comedian Spike Milligan put it more succinctly, parodying those opening lines of the poem by adding the single word: "Twit."

Cutting across the heroism of Hemans's subject, the cynic will argue that that it is easy to be brave when you are unaware of the peril faced. But, more to the point, it is easy to be bullish and optimistic about a situation when you have no clear understanding of what is going on.

It is in that "fog of war" that our earlier commentators operated, Messrs Parris, Jenkins, Harding and Mercer – plus the many others, including this blog author. 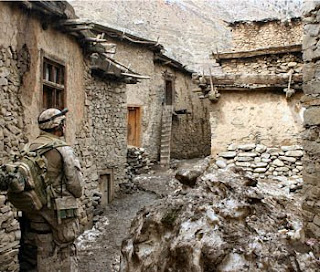 We can all look at the bits of the story that either attract us, or reinforce our innate prejudices, and draw whatever conclusions we wish to see. Those who would wish to see us lose Afghanistan can find evidence to support that thesis and those who, for whatever reason, wish to argue that we are prevailing, can find any amount of material to support that view.

Casting the net wider than have most, however, one finds an unusually blunt paper written for the Center for Strategic and International Studies in December 2007, Anthony H Cordesman complained of "an uncertain war with far too few metrics".

Although an American writer, his focus is not entirely on his own country, embracing as he does, "virtually all the Western governments involved" in Afghanistan - as well as NATO/ISAF.

What they have in common, he writes, is that they provide little meaningful data on progress in the conflict in military, political, economic, and ideological terms. There also is little effort to analyse the length of effort required, the ratio of resources available to resources required, and treat the conflict as what is almost certain to be a long war and a long exercise in nation building. He continues:

Part of the problem may come from the fact that so many governments and official bodies are involved, and there is no central authority that provides comprehensive reporting. Most of the official reporting on Afghanistan – whether US, NATO, or allied country - is little more than public relations material. NATO and national web sites provide almost no meaningful "metrics" for measuring progress, and there have been few meaningful government reports.

The United States government, which provides the bulk of the military and financial resources for the war, is a good case example. Unlike Iraq, the US government has never attempted to provide any structured metrics or analysis of the fighting.

The US Department of Defense has largely halted detailed reporting on the war. It has not provided any recent formal reporting on the course of the war. The web site for Operation Enduring Freedom has been replaced by a general heading for Afghanistan that is almost useless in providing meaningful information on the war.

The US State Department provides some data on aid spending, but no meaningful data on either the detailed justification for that aid or measures of effectiveness of aid beyond some data on projects completed as distinguished from the level of requirements met and impact on war fighting. The White House web site is little more than a morass of slogans.

What, in effect, Cordesman is saying is that no one really knows quite what is going on in Afghanistan and, in particular, whether the massive inflow of funds, resources and manpower is have the effect intended.

On the other hand, enough seemed to be known for an ad hoc Afghanistan Study Group, under the aegis of the Center for the Study of the Presidency, to make its own report a month later. And the findings do not make for happy reading. "The mission to stabilise Afghanistan is faltering," it says, then telling us:

Following the rapid successes in toppling the Taleban government, passing a new constitution, and electing a president and parliament, the long road to reconstruction, reconciliation, and institutional development has grown hazardous.

Despite a significant increase in the number of foreign troops and the amount of aid to Afghanistan since 2002, violence, insecurity, and opium production have risen dramatically as Afghan confidence in their government and its international partners falls. The year 2007 has been the deadliest for American and international troops in Afghanistan since US-led coalition forces invaded Afghanistan in 2001.

The most immediate threat to Afghanistan comes from an anti-government insurgency that has grown considerably over the past two years. It has become apparent that the Taleban cannot fight the U.S. and coalition forces head-to-head, and coalition forces have had success in targeting Taleban leadership over the last year, capturing or killing several senior commanders.

Therefore, the Taleban rely on terrorism and ambushes, launching over 140 suicide bombings in 2007, with numerous attacks in the heart of the capital, Kabul. Over 80 Afghan civilians reportedly lost their lives in suicide attacks in September 2007 alone.

The Taleban have been able to infiltrate many areas throughout the country, especially the south and the southeast where the government is weakest, intimidating and coercing the local populations and occasionally holding territory. As a result, the prospect of again losing significant parts of Afghanistan to the forces of Islamic extremists has moved from the improbable to the possible.

This sober analysis, however, was itself not entirely objective – or, at least, without political motivation. Published in the late January of this year, it had in mind the April Nato summit in Bucharest, when the US intended to jolt coalition members into providing more troops and releasing some of the restrictive caveats which reduced the effectiveness of the Nato mission.

In part that was successful but only partly so – with the French committing to send an additional battalion of troops and some agreement that the troops in the more peaceful northern regions of Afghanistan could be used as a "theatre reserve" in the event of serious (but unspecified) problems.

But, if the Afghanistan Study Group was trying to make a point, it was not the only one to take a pessimistic view. In 2006, award-winning journalist Fariba Nawa had written a penetrating report on the reconstruction programme in Afghanistan. In her epilogue, she writes:

Afghans are losing their faith in the development experts whose job is to reconstruct and rebuild their country. While the quality of life for most is modestly improved, they were promised much more. What the people see is a handful of foreign companies setting priorities for reconstruction that make the companies wealthy, yet are sometimes absurdly contrary to what is necessary.

This is against the background of US spending of an estimated $140 billion since 2001 on military spending in Afghanistan, with another $10 billion spent on "reconstruction" (out of a total of $25 billion allocated from all sources).

Meanwhile, the United Nations Office on Drugs and Crime reports that the value of Afghan opium exports in 2007 rose 29 percent over the previous year and was equal to 53 percent of the country's legitimate gross domestic product. A follow-up report issued on 6 February predicted that opium production this year would be at or near 2007 levels.

In addition, the report noted, "another disturbing trend is the steady rise in cannabis cultivation, giving Afghanistan the dubious distinction of being one of the world's biggest suppliers of cannabis in addition to providing over 90 percent of the world's illicit opium." Afghan farmers are diversifying, but not in quite the way intended.

Thus, when Cordesman complained of "an uncertain war with far too few metrics", he could have put it differently. Too many of the "metrics" that are available point in the wrong direction. Baker's "confidence" – with which we started this part – is definitely that of the boy on the deck of the burning ship.