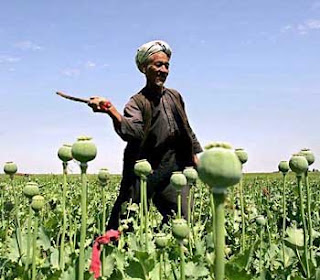 We thus conclude that the military's primary task must be to support and facilitate agricultural development. But, to be more specific, we must step down from the lofty heights of theory and look at local agricultural issues. A good place to start is with poppy growing – an important part of the agricultural economy in Helmand. This province alone is the source of 50 percent of the world's opium supply.

Here, the task is not development, but eradication – seemingly a contradiction but in fact not so. Economic development has to be sustainable, which cannot be the case if it is reliant on the production of a noxious and illegal narcotic. Eradication, therefore, runs hand in hand with substitution. 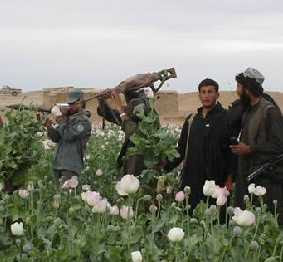 The physical process of eradication of poppy fields – and the assets associated with the production of heroin and its distribution – is often allocated to the military, and especially the ANA. Thus it could, in theory, be defined as a task for the British armed forces except that that destruction of standing crops is thought to be counterproductive.

The theory is that this impoverishes farmers and drives them into the arms of the Taleban but, as so often, there is more than an element of mythology here. In fact, it is one of the enduring myths about opium production in Afghanistan that poverty-stricken farmers resort to poppy growing in order to eke out their meagre incomes – the destruction of their crops thereby acting as a recruitment sergeant for the terrorists.

According to a recent UN Report, there is by no means a direct link between poverty and opium growing. To the contrary, that business in Helmand is increasingly the domain of the more prosperous farmers – those with larger land areas.

Nevertheless, it should not be assumed that the poor do not benefit from poppy cultivation, even where larger land owners are the predominant growers. As this report indicates, the harvesting of opium provides jobs for itinerant labourers – as well as for small farmer and sharecroppers who are unable to earn sufficient income from their own endeavours. Furthermore, the transport and processing of opium provides additional jobs, providing valuable off-farm income for subsistence farmers.

Additionally, the bribes and informal taxes associated with the opium trade fund local administrators and officials, and augment the income of very often poorly-paid police, making poppy growing an important contributor to the wider economy.

However, why poppy growing is increasingly popular amongst larger farmers is complex and rarely fully explored, but one significant problem is one of surplus production of cereals – one which has taxed developed economies for many decades - compounded by the primitive agricultural infrastructure and the lack of security.

Although Afghanistan as a whole is only ninety percent sufficient in cereals, as we have already remarked, Helmand province produces over 120 percent of its cereal requirements, leaving it with substantial surpluses. Yet, while the obvious answer would be to export the surplus to deficit regions, in practice, this proves difficult.

At its most basic level, transportation is difficult and costly, not least because of the absence of good roads and the depredations of "bandits" (sometimes the local police), and the very real risk of mines and IEDs. More generally, markets are not well integrated and deficit areas tend to rely on cross border flows of wheat. Bizarrely, the east and central regions rely on imported wheat from Pakistan because it is available and cheaper. Western provinces purchase wheat trans-shipped through Iran.

On top of this, there is a perverse incentive as well-meaning aid agencies import and distribute food from abroad, rather than source locally (from within the country).

As a result, local prices in Helmand are adversely affected by local surpluses and, in the absence of a government market intervention scheme, this incentivises farmers to regulate their production themselves – and thereby reduce supplies – by switching acreage to alternative crops. In this context, poppy growing is an attractive proposition, made even more attractive by the financial and other arrangements relating to the marketing of the different crops. 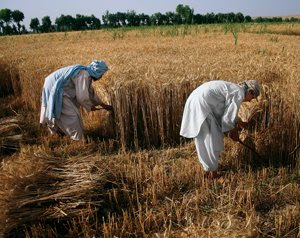 In relation to cereal crops, not only is the physical infrastructure poor (roads, etc.) marketing information is limited. Here, it is a given (certainly in more sophisticated western economies) that farmers do not make money growing crops, but by selling them at the right time to maximise the price. Sometimes, they may sell their crops "forward" before the seeds are even in the ground. At other times, they may hold off selling until after the harvest, if prices look like increasing.

Such flexibility requires reliable marketing data and good communications, neither of which exist in Afghanistan. This leaves farmers reliant on a network of "middle men" who operate an informal cartel, depressing farm gate prices to a level below that which farmers might expect in a more competitive market.

Then, while farmers are often required to deliver their produce to local markets before they receive payments – which fluctuate wildly – buyers will collect opium directly from farms at guaranteed prices, fixed in advance. Furthermore, it is easier to obtain credit to finance opium growing than it is conventional crops. Economically and in many other ways, therefore, poppy growing is a much better deal, not only for its intrinsic value but also for its role as a "market regulator", augmenting conventional cereal production and, to some extent, financing it.

Interestingly, there is anecdotal evidence that wheat production, in times of high demand, is more profitable than poppy growing. The gross income from selling raw opium might be higher, but the process is highly labour-intensive, requiring more inputs. Thus, with commodity prices at record highs, the current "global food crisis" provides a unique opportunity to promote a long-term switch from opium to food.

Now, with some of the complex background set out, it begins to be possible to identify some very specific military tasks – all within a focused strategic framework. From that could stem better ideas as to the formations and equipment needed, enabling the military to adapt to the functions which need to be undertaken. But what it also points up is that any military activity must be closely integrated with, and responsive to, a cocktail of high policy, other agency activities and government actions. How this could work in practice we will explore in Part V but, before we go there, we need to look at another aspect of agriculture in Afghanistan - the plight of the "small" farmer and the implications for containing the insurgency. These, we explore in the next part.