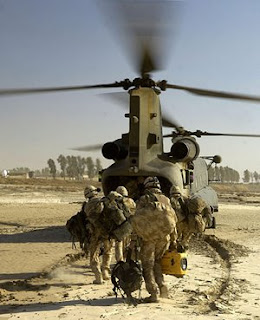 Reviewing the implications of the four pieces we have looked at in Part I, it is no wonder the general public is confused by – if not indifferent to – the situation in Afghanistan, the one begetting the other. Even this small sample presents a confused picture.

Parris, on the one hand, tells us – or certainly implies – that we should withdraw now because we are going to do so any way. Jenkins wants us to retreat to our bunkers in Kabul and let Karzai do deals with the warlords and Taleban. Harding thinks we can win the military campaign if we change our tactics and Mercer thinks likewise, but simply wants to put all our troops in helicopters.

The "opinion-formers" lacking any coherence, we have to attempt to divine our own, in which context the Parris rhetoric has to be dismissed. But his analysis carries the warning that, should the military continue to sustain casualties without there being any clearly defined progress, history does indeed tell us that the troops will eventually have to be withdrawn, their task unfinished.

It is certainly our view that, without more fundamental changes to the way the war is being prosecuted, the insurgents will be able to keep killing British soldiers. Our own government, the media and the military will do the rest - the first two by failing to present a clear picture of what is happening, within a framework of sensible and achievable aims and objectives; the military – pace Harding - by failing to adjust their tactics and equipment.

We will return to the military shortly, but first we must address the Jenkins option. Essentially, the man is expressing classic British colonial doctrine. Traditionally, we ruled from the centre and used a network of local alliances, gauged so as to keep the warring factions roughly in equilibrium and thereby maintaining some sort of stability.

This was more or less the strategy we were pursuing in southern Iraq, giving the militias a free run – with the disastrous results we have seen, brought to an end only by the intervention of Maliki and his Iraqi Army formations. It could hardly be more successful in Afghanistan and it would be some considerable time before the Afghani National Army could intervene on the scale witnessed in Iraq. In short, Jenkins is offering a recipe for disaster.

In setting out this option, however, Jenkins provides a useful foil against which we can explore more realistic objectives. And here, it is useful to look at aspects of the bigger picture which are rarely discussed.

The essential problem with Afghanistan, one can venture, is that it has never been a proper nation – at least in a modern sense. The southern provinces, and especially Helmand, where the bulk of the British are deployed, are often described as "lawless", reflecting the fact that the writ of central government has never really extended to these areas in any meaningful way. Thus, in many respects, activity which is described as "reconstruction" is wrongly labelled. It is construction, ab initio, bringing to the table something which has never previously existed.

Thus, if the Nato military adventure is to succeed, it must have a defined end point. Arguably, that is expressed by the term dismissed by Jenkins as "nation building" – bringing the writ of central government to previously ungoverned areas.

However, government for the sake of it cannot – or should not - be the objective. Nor indeed is the government a bringer of "security". Without British or central government intervention, there is already an element of stability whereas the presence of armed forces brings death and destruction. Even (or especially) the police – all too often – have nothing to offer, other than extortion, corruption and the perpetuation of inter-tribal rivalries.

To define an end point, therefore – one which is meaningful to the inhabitants of the area rather than the international community – is a pressing need. Time and again, we hear complaints that such a definition does not exist. The military operation exists in a vacuum, lacking clear objectives which, in turn, will define milestones which will point the way to disengagement.

Therein, possibly, lies the ultimate failure. It is not so much that the military objectives are unachievable – they simply have not been defined (at least, in terms that mean anything to the population of Afghanistan and, in particular, the inhabitants of the southern provinces, where there is the bulk of the fighting).

Because this is an insurgency, those objectives cannot be expressed in military terms – such as number of insurgents killed (the "body count") or in areas occupied and thus "pacified". The insurgents are not fighting for territory and have – in relative terms – inexhaustible manpower.

Instead, the end point must be expressed in non-military terms, and only then can the military tasks be properly defined. These, in the final analysis, will be those necessary to achieve an outcome which will enable progressive disengagement and then withdrawal.

Here, one must not look at the enemy – whether the "Taleban", which encompasses all manner of factions, or even Al-Qaeda – but at the shape or disposition of the territory and its inhabitants as it is now, and as you want it to be in order that withdrawal can be safely accomplished.

Such a disposition can, of course, be expressed in general, uncontroversial terms. One looks for a stable society, one which is able to feed and support itself economically and one which offers a tolerable standard of living and levels of freedom and self-determination, compatible with cultural norms. Whether the latter means "democracy" is a moot point. Arguably, economic self-sufficiency and prosperity come first.

In order to be more specific, one has to look at the individual provinces – there is no case for a "one size fits all" solution. Thus, turning to Helmand province, one sees not an impoverished land but one which possesses – in the Helmand valley – an area of enormous fertility, with huge productive potential. It is one which, already, is 120 percent self-sufficient in cereals, mainly wheat and maize. Yet it is also an area where poverty is extensive and also one where the bulk of the opium crop is grown – the revenue from which is fuelling the insurgency.

In short, the province is basically an agricultural community with over 90 percent of the population gaining their living from the land, or activities closely related to agriculture. Yet, despite in some ways, being relatively advanced – with significant ownership of tractors and combine harvesters – the structure of the industry is primitive. As bad, the infrastructure is massively under-developed.

Factoring all this in order to define a desirable end point, the logical objective would appear to be the development of the agricultural industry and its infrastructure, increasing prosperity and ensuring that wealth reaches all parts of the community. To do that, the province needs, very badly, above all else – an effective agricultural policy and the means to deliver it.

Here now, one can begin to see an intriguing problem. All the great strategic and military minds applied to the problem of the war in Afghanistan have missed the point, and are uniquely unqualified to determine the outcome. As long as they are looking for military solutions, in terms of defeating the enemy, they will fail. We need to look at how to develop the agriculture and then enlist various agencies – including the military – in pursuit of that task.

It is not thus, a question of winning the military battle, and then turning to the consequential task of "winning the peace". The military effort needs to be specifically harnessed to creating the economic conditions for prosperity, from which lasting peace will emerge.

There, Jenkins's nostrum is entirely unhelpful. Warlords and warring factions will never develop the province – they are largely responsible for the current parlous state. Equally, walking away – as Parris would have us do – is no solution.

But what of our two militarily-orientated commentators, Harding and Mercer? Here, we have an interesting conundrum. Looking at the battle from an entirely military perspective, both could be right – Harding possibly more so. But then, they may be completely wrong.

The fascinating thing about military affairs – and especially fighting formations and equipment – is that they are (or should be) the ultimate in functionalism. They should be designed specifically for the tasks they are to undertake. Unless those tasks are defined adequately – with some clarity – it is impossible to suggest either optimum structures or equipment.

What those tasks should be, and how they could begin to influence military structures and equipment we will develop later.