That amazing "own goal" 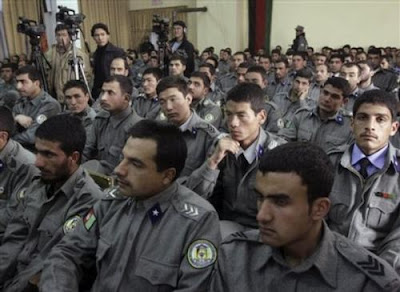 In the not too distant future, when the Cleggeron administration crashes and burns, one of the key stresses that will have brought it down will be the totally unforced error made by David Cameron in adopting the previous government's Afghan policy and thus locking himself in to an unwinnable war.

Quite how politically crass this move really is can be seen from two similar articles, one in The Daily Telegraph and the other in The Guardian. The theme is identified by the headline from the latter, which tells us: "Afghan police failings fuelling Taliban recruitment, say UK army chiefs," painting "a devastating picture of the corrupt and ill-disciplined local police force."

What one has to appreciate is that the role of the Afghan police is absolutely pivotal to the success or otherwise of the current strategy. Not unless or until the police are able to take the load can we – according to the agreed doctrine – even think about withdrawal. But, not only do we have the British Army cast serious doubts about whether the force is at all capable, this comes on the back of the complaints by the US Forces in the New York Times earlier this week.

Then there is another piece, this one in the Washington Post, with a US commentary which notes: "Afghanistan Police: Still Corrupt After All These Years." The WAPO narrative runs as follows:

"The hardest nut for us to crack is to build faith in the institution of the police," said Haight, the regional commander. During home searches for weapons or insurgents, he said, Afghan police often "shake down the house like criminals." In terms of training and morale, he said, the police are about five years behind the army. "We have to show them what right behavior is, to secure the people instead of being corrupt and victimizing them," he said.

This in turn elicits the comment: "It's not unreasonable to wonder why, if the culture hasn't been amenable to change after years of intensive efforts, why it ever will." But the "killer point" here is the date – 8 March 2009. More than a year ago, exactly the same things were being said that are being aired right now.

In the current Guardian piece, we get Brigadier James Cowan, commander of 11 Brigade stating that the police are "most often cited as why there is a problem and why people joined the Taliban", the problem being compounded by Taliban propaganda. Taliban fighters wore Afghan police uniforms as they stole money and possessions from innocent people at checkpoints.

Afghan security forces appear in many ways to be as much part of the problem as the solution, Cowan says, and his comments are echoed by Lt-Col Roly Walker, commander 1 Bn Grenadier Guards, with an added twist. He says the Taliban exploited grievances to "incite insurrection" but then adds that the Taliban are not the biggest obstacle to success. Rather they are "consequences of much deeper social and political grievances".

And that is very much the case, all of which stacks up to the fact that Cameron has indeed shackled himself to a policy that cannot succeed, no matter how much resource he throws at it or political capital he invests in it. If he is going through the motions, despite having told parliament (and through that the nation) that he would fully support the military, then he has the worst of all possible worlds – a failed policy for which he has accepted full responsibility.

You don't get much more crass than that. Yet, bizarrely, the Tory Boy Blog believes this is an achievement. You can see how the Tories managed to win the election so convincingly.