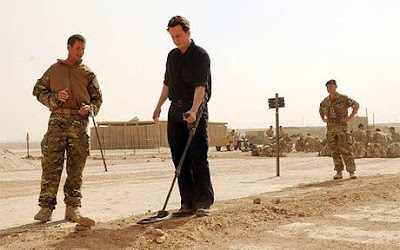 It is a bit of a cop-out for the Tory Boy blog just to paraphrase Liam Fox's speech to RUSI yesterday, and then to offer a link with no analysis. But, like the rest of the Tory blogosphere, they're running frit on defence issues, not even picking up on the Great Leader's speech. It seems they can do the soft and girlie issues but can't cope with real political meat.

Talking to a journalist yesterday about the reluctance of the "right wing" blogs to deal with defence, he suggested that individual writers might be deterred by their lack of first-hand experience. They are intimidated by men in uniform, with their medals and sewing badges and tales of derring-do, and fear laying themselves open to criticism for "not being there".

I certainly had to deal with that in writing Ministry of Defeat - a whole book about the campaign in southern Iraq without ever once going as far as Basra. In that precise context, reading accounts of the great 1954 battle of Dien Bien Phu (where I was also absent), I came across in Bernard Fall's book this observation:

The Battle of Dien Bien Phu was lost during the brief fortnight between Novermber 25 and December 7, 1953. It was not lost in the little valley in Viet-Nam's highland jungles but in the air-conditioned map room of the French commander-in-chief. Once Giap had decided to accept trial by battle at Dien Bien Phu, it remained only for 15,000 French and 50,000 Viet-Minh troops to act out the drama in pain and blood and death.

So it was with Iraq. The British lost the battle not in the streets of al Amarah and Basra, but in the corridors of Whitehall and the claustrophobic rooms of 10 Downing Street (yes, I have been inside). "Being there", in the sense of being where the action was, would mean being in many different places (often simultaneously) and many where only insiders had access. Constructing a historical narrative, therefore, requires the use of research skills, not direct observation of events.

In the context of the military telling us that there is no military solution to the conflict in Afghanistan – one thing the limited intellects of the military brass seem to be able to understand – the "battle" is essentially political. Thus, the battle is being lost not on the streets of Kabul, Kandahar and Musa Qala, but in the corridors of Whitehall and the claustrophobic rooms of 10 Downing Street.

The refusal to follow the narrative and engage with the politics represents one of the greatest failings of the right-wing "claque". There is a moral and intellectual cowardice here – which explains the lack of response to my recent challenge. However, this is not the first time I've taken on the "claque", having written a strongly-phrased piece in September 2006 and again in January 2007.

I know the pieces were read, and the lack of comment and response is driven by a sense of shame and embarrassment – some have admitted as much to me privately. And as well they might hang their heads in shame.

But one person not afraid to get stuck in is our feisty "Dundee wifey" who vastly outshines these big, butch political bloggers who are so full of themselves. She picks up a military blog called Think Defence which has The Boy's strategy sussed. This is the "Iraq gambit", which comprises two broad elements:

In fact, while the girly-boy bloggers cower in their bunkers, it is very much the fairer sex which makes the running, with Mary Riddell telling us that, "Britain is stuck with a war it can't afford and can't win".

In a powerful turn of phrase, she writes of "Mr Fox's batsqueak of truculence" which "echoes the discredited Blairite credo that Britain should punch above its weight and beyond its purse." Both Mr Cameron and the opposition, she says, "owe the country more honesty."

Indeed they do, but as long as the fabled right-wing blogosphere is sitting on its hands, with its collective heads in a physiologically impossible position, The Boy has neither need nor incentive to do anything other than to continue on his ruinous course. But he will need more than a metal detector (pictured) to chart his way though this minefield. We've seen it all before with Iraq so some of us already know what he is doing. We will not be silent, even if the "claque" has muzzled itself.