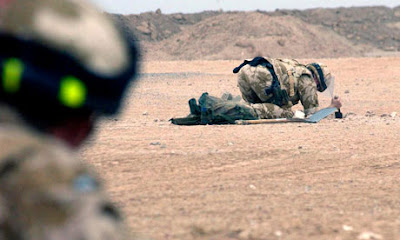 A bomb disposal expert was killed in a gunfight with insurgents yesterday, The Guardian tells us, using the MoD as it source.

The solider from 101 Engineer Regiment (EOD), was attached to the joint force explosive ordnance disposal group, part of the counter improvised explosive device (IED) task force. He was "... part of an EOD team that was extracting from an incident when he was killed by small arms fire," said Lieutenant Colonel James Carr-Smith, a spokesman for Task Force Helmand.

"He died seeking to rid Helmand of IEDs such that local Afghans could move freely throughout the province. He will be greatly missed and his actions will not be forgotten. We will remember him," adds Carr-Smith.

But fine words butter no parsnips, as the saying goes. There are occasions when EODs must work out in the open, and this does put them at risk. However, as long as there is vehicle access to the site of a suspected IED, then there is no need whatsoever for a soldier to expose himself to fire.

In the first instance, there is the Husky set, for detecting IEDs and for detonating pressure-pad initiated devices. Mine rollers and armoured bulldozers also have their place. Then there is the Buffalo armoured vehicle, which can be used to investigate suspect devices. There are also tracked robots which can be used for further investigation – these can be controlled from the safety of a Mastiff protected vehicle.

However, in this man's Army, great value is placed on the ability of the EOD to neutralise and then dismantle IEDs, for the forensic evidence that it yields and thus the assistance it gives in tracking and arresting bomb-makers. For that reason, it is held, EOD must expose themselves to danger – for the greater good.

That argument would stand up if the policy led to a reduction in the number of bomb-makers and the number of IEDs placed. In fact, despite four or maybe five EODs being killed (perhaps more), plus an unknown number of soldiers killed while using hand-held metal detectors, IED incidents are at a record level.

Further, there are different and better ways of gaining intelligence to thwart the bomb makers, such as automatic change detection, or even direct UAV observation, tracing bomb-layers back to their bases – plus more subtle techniques.

Two years ago, we were asking how many more times must men be pitted against bombs, when there are machines which can be used in place of flesh and blood. In fact, we have been pointing this out ever since 2005.

Sending men against bombs is the equivalent of the First World War practice of having men in orderly lines walk into the muzzles of machine guns, instead of using tanks. In this modern age, we find it appalling that the military could even consider such barbarity – so why is it acceptable for the modern-day military to do what amounts to the same thing?

We need to forget the fine words – and bring these people back home alive.