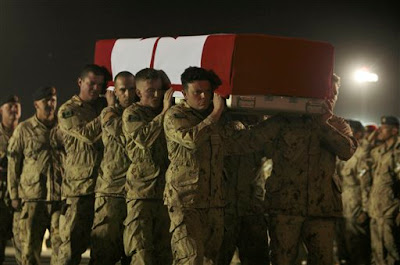 Associated Press is reporting that twelve foreign troops were killed in Afghanistan yesterday in what it is calling the "deadliest day" this year.

Casualties included seven Americans, five of whom were killed in a single IED blast. Separately, a US civilian police trainer and his Nepalese security guard died in a "brazen suicide assault". One French and two Australian soldiers were killed. The nationality of the remaining two has not been specified, although the MoD is saying that no British troops were killed.

The Canadians (pictured) are counting their losses from a previous day, their total deaths now standing at 147 compared with 292 for the British and well over 1,000 for the US.

US Lt-Gen David Hurley was anxious not to overplay the significance of the numbers, telling reporters: "I think we're just seeing a hard day in theatre," he said. "There are a lot of troops in action, a lot going on at this present time, and this has just been a difficult day for us."

However, the brazen nature of the attacks has stunned observers. The American police trainer was killed when a team of three suicide bombers attacked the main gates of the police training centre in Kandahar. One bomber blew a hole in the outer wall, enabling the two others to rush inside.

US commanders are warning of more casualties as NATO forces gear up for a major operation to secure Kandahar, but the ferocity and persistence of the Taliban attacks bode ill for the continued operations.

This type of "targeted" suicide bombing is, of course, not new – but one previous appearance of the tactic should provide some warning. Contrary to popular belief, this is not confined to Muslim or even religious groups, and was seen in the late 40s and early 50s in French IndoChina, employed by the Communist Viet Minh.

Then as now, Western forces are not dealing with an "ordinary" enemy, one which would respond to the "normal" political calculus, or even extravagant casualty rates.

And nor is the optimism of ISAF forces at all reassuring. It is germane to note that, prior to its fall, the French garrison at Dien Bien Phu had been the object of an unprecedented number of high level visits. Yet, as French Commander-in-Chief Gen Henri Navarre observed:

... not a single civilian or military authoritative person, including French or foreign ministers, or American generals ... ever to my knowledge, admitted any doubts before the attack on the ability of Dien Bien Phu to resist.

As before, one can rely on the premise that "everybody" can be wrong. What particularly marks that campaign was the dismissive treatment of the "amateur" general Vo Nguyen Giap, and the tendency to under-rate the capabilities of the Viet Minh. That gave the French in 1953 an uncomfortable number of "difficult" days and led to their eventual defeat.

More than fifty years later, we seem to be travelling the same path.