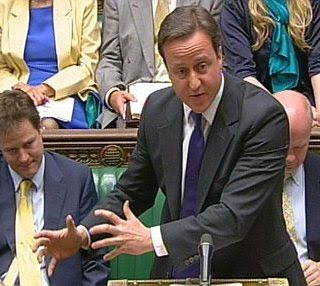 Although much hailed before the event, getting information on yesterday's meeting of Cameron's national security committee is proving extraordinarily difficult. All we have so far is a very limited statement from a Downing Street spokesman, telling us that: "There were wide-ranging, intensive and productive discussions during the extended session on this, the Government's top foreign policy priority."

"The Prime Minister and the NSC," we are also told, "expressed their great admiration and support for our troops serving in Afghanistan and paid tribute to the essential contribution that they and their civilian colleagues make. The NSC will now continue its work to ensure that the UK does all it can to support the agreed Nato strategy in Afghanistan to succeed."

Separately, we have a report in The Guardian which makes the claim – attributed to officials - that Britain is putting pressure on Afghanistan to assume full responsibility for its own security as soon as possible.

If that is true – and there is no reason why it should not be – it quite possibly represents the ultimate example of hope triumphing over experience, there being any number of accounts which attest to the incompetence of Afghan security forces.

The latest of these comes in the New York Times which describes the Interior Ministry's most promising force, which has been "undercut by drug use, petty corruption and, at times, a lack of commitment in the face of the ordinary hardships and duties of uniformed life."

This piece deserves to be read in full but particularly relevant is the observation that many of the police from the force profiled were Tajik, and did not speak Pashto, southern Afghanistan's dominant language. Unsurprisingly, one of them complained: "Nobody can find a lot of information about the Taliban."

What, of course, this destroys is the facile idea that the southern, predominantly Pashtun population is ever going to accept the rule of Kabul, bolstered as it is – and has always been historically – by the northern tribes of an entirely different ethnicity.

Thus Simon Jenkins is telling us in The Guardian that Cameron should take the opportunity of the switch in Helmand from British to US control to admit the obvious and start to plan how best to leave. It is idle to pretend, he writes, that Britain's 2006 expedition to bring Helmand under the control of the Kabul regime has anything but failed.

Yet, rather than take that opportunity, the Cameron stance has been to support the last administration's policy and, as he did during the session allocated to PMQs in parliament today, commit to providing the military with "whatever they need", thereby effectively taking ownership of the conflict. It may have started off as Blair's war, then to become Brown's war, but it has now undergone a glacially smooth transition, on its way to becoming Cameron's war.

There is no obvious political reason why the Cleggeron leader should so recklessly assume responsibility for this conflict – other than, perhaps, he has been unduly influenced by today's leader in The Daily Telegraph, which intones that "tangible results" are "desperately needed" to reassure an increasingly sceptical public that the war is winnable - an outcome which only that newspaper can believe is possible.

"Providing clear and unequivocal support for the military effort would be a good start," the paper says, advice which Cameron seems to have taken, unwittingly falling into a trap from which he will find it difficult to extract himself.

As a harbinger, the significance of which it is unlikely he would understand, yesterday we learned of the death of another Danish soldier, since identified as 22-year-old Private Sophia Bruun. She was killed close to Bridzar military base in Helmand, after a Piranha armoured personnel carrier was hit by an IED.

The point that will escape Cameron is that this vehicle type was intended to be the base for the FRES utility vehicle which, given a choice, the Army would have preferred to the Mastiff and other protected vehicles. Affording the Army "unequivocal support" may prove to be unwise, given that it most often has no real idea what it really wants and, in any event, should be given what it needs rather than what it wants.

In return, however, the one thing Cameron need not expect is "tangible results", other than seeing the number of deaths climb from today's figure of 290 – with yet another Royal Marine killed by a bomb in Sangin – to 300 in the very near future. For his first performance in the PMQ slot today, he had to read out three names. Already, he has another for next week's list and soon enough he will be dealing with the torrent of media "celebrating" that macabre third century.

By then it will truly be Cameron's war. And if he makes 400, it will be the only thing he "achieves" from it.