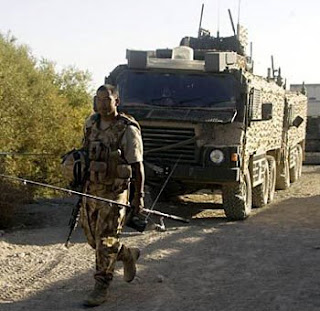 Although initial media reports, based on MoD information, made no reference to the vehicle type, we must commend the MoD website report on the untimely death of Corporal Jason Stuart Barnes from the Royal Electrical and Mechanical Engineers (REME), which does name the vehicle involved.

The incident happened on the late evening of 22 July when, according to the official account, Kajaki Company of 2 Para had deployed forward from their base to counter the Taleban's attempts to influence the local population in nearby villages, and prevent them from firing mortars and rockets at the base and the Kajaki Dam.

Cpl Barnes was an armourer and part of 2 PARA's REME Light Aid Detachment. His job was to maintain the company's weapons in the base, but often took a turn driving the Vector ambulance vehicle in support of the company's operations.

Given the lack of detail of the strength and positioning of the IED, one cannot positively affirm that another, better protected vehicle such as the Mastiff, would necessarily have protected Cpl Barnes. But, given the known vulnerability of the Vector, and the success of the Mastiff in saving troops from mine and IED explosions, the presumption must be that the outcome might have been very different had a Mastiff been used.

Of course, that also presumes that the heavier Mastiff could have reached the area accessed by the lighter Vector, which might not have been the case. That leaves the question open as to whether things could have been done any differently.

However, as we know, there are lighter MRAPs than the Mastiff, and it was the MOD's choice in the first instance to go for one of the heavier types, when alternatives were available.

Even the Ridgeback, currently on order and due in theatre soon, is still a heavy vehicle and there is no assurance that it could be a complete replacement for the Vector, nor even the Bushmaster, which is on order for the Special Forces.

We do accept deaths as a tragic consequence of the deployment of troops in Afghanistan and we are profoundly grateful to the young men and women who so bravely risk their lives on our behalf. Nevertheless, the continued toll of casualties and the complete absence of reports of deaths amongst those fortunate enough to be tasked with riding in Mastiffs, does raise serious questions as to the continued deployment of the Vector.

This is the fifth death that we know of in Vectors, and there have been other deaths in unarmoured Pinzgauers.

We do not accept that there should be these unnecessary deaths – those which, with a modicum of care and the right equipment, could have been avoided. Subject to the caveats we have expressed, the death of Cpl Barnes seems to come into that category. Should it be the case that a better-protected vehicle would have saved his life, his death will indeed have been unnecessary, making this incident all the more tragic.

The MoD, and particularly the Army, must think seriously as to whether this vehicle remains in theatre.