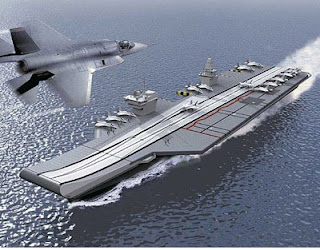 To absolutely no one's surprise, the government has gone ahead with the order for two aircraft carriers, formally announced today at a cost that seems to vary according to source between £3 and £4 billion.

The ships, to be named HMS Queen Elizabeth and HMS Prince of Wales, will be the biggest and most powerful ever constructed for the Royal Navy. Each will displace 65,000 tons – roughly the same weight as the QEII cruise ship - and carry 1,450 crew with up to 40 aircraft.

Defence secretary Des Browne calls it "an historic day for everyone in defence … Today's contract signing seals the future for thousands of jobs, and ensures that we will have a Royal Navy fit for the 21st century." The contract was signed on board HMS Ark Royal in Portsmouth.

As expected, the ships will be constructed by a consortium that includes BAE Systems and the VT Group. Other members include Babcock International Group and France's Thales, which were involved in the design. Work will take place at shipyards in Barrow-in-Furness, Glasgow, Portsmouth and Rosyth and – given there are no delays – the ships will enter service in 2014 and 2016.

Needless to say, the order has reactivated the ongoing debate about defence spending priorities – the BBC hosted such a discussion on its lunchtime Radio 4 news programme, part of which has been repeated here. The obvious point was made, to the effect that this huge expenditure could hardly be justified when the Army was struggling to meet its equipment requirements.

No doubt, we will continue to rehearse these issues on this blog and our forum, but it would help focus minds if more realistic figures were used. At the moment, the ship construction costs are being cited, but it seems to have escaped attention that these are aircraft carriers, which means that these also have to be bought and paid-for.

Currently, the Joint Strike Fighter order, to equip these ships, is cited at around £10 billion. If you add the infrastructure costs (upgrading a Naval Air Station and also providing new dry dock facilities) and add in the permanent fleet escorts that will be required, the total cost of this project is in the order of £20 billion.

Arguments made for the project costed at £4 billion may or may not stand up, but they take on a different dimension when £20 billion is being considered – not including the running costs. In terms of force projection, one needs to ask what else could be bought for the money, and whether that would have the same "reach" or more as two large ships, their escorts and aircraft.

This is, I suspect, a debate which will be fuelled more by heat than light. But once again, the political dimension seems to be lacking. Given a change in government at the 2010 general election, it will be the Conservative administration which will have to find the bulk of the money to fund this project. What price Cameron refusing to make funding commitments when this government is making them for him?