Not one but two 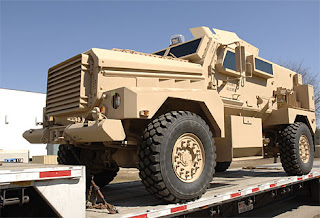 "There was no mistaking the loud blast Tuesday afternoon just outside Zangabad village, a known Taleban haunt in Kandahar. It was another improvised explosive device." So starts a piece from the Canadian National Post, but the good news is in the headline: "Three Canadian soldiers survive IED blast".

"No one was killed this time," the piece continues, "but it was the worst way possible for three Canadians soldiers from an explosives ordnance unit to find the IED." They hit the device while moving towards Zangabad in their Cougar – one of five acquired recently by the Canadian Army.

The explosives, we learn, were apparently tucked underneath a culvert, just 400 yards or so from an Afghan National Police substation. The Cougar was tossed sideways and the culvert partially destroyed. No one was seriously hurt. Two of the soldiers received minor injuries but all three were able to walk away from the incident. "The vehicle did its job," said spokeswoman Capt. Josee Bilodeau.

Compare and contrast with the experience of the British Army, most notably the incident reported on 21 January which, at the time, we thought might have been a Pinzgauer Vector – yet another example of this death-trap which failed to protect its crew. 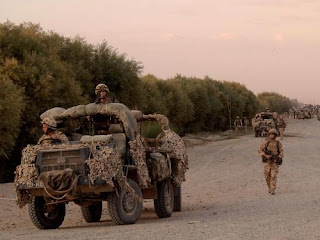 As it turns out – from a devastatingly sad piece in The Sunday Mirror - the vehicle was definitely a Pinzgauer but not the armoured Vector version – not that the armour would have made any difference.

The information came not from the MoD but from Rupert Hamer, the Sunday Mirror’s defence correspondent, describing the circumstances of the death of Corporal Darryl Gardiner.

What had confused us initially was the report that there had been one death and five injuries, six all told in the incident. Since the standard 710 model 4x4 Pinzgauer truck normally carries a crew of three on patrol, it seemed more likely that a Vector, used as personnel transport, might be involved.

However, the circumstances were more tragic and heroic than we imagined. Corporal Gardiner had died saving the life of a badly-wounded soldier, just over a mile from the town of Musa Qala.

Another vehicle – which we understand to have been a WIMIK Land Rover - from the same unit, the Brigade Recce Force, had been hit by a mine and Cpl. Gardiner had driven to the troops' rescue. He had then picked up a badly-wounded soldier and was ferrying him towards a waiting helicopter. About 100 yards short of the helicopter, the mine went off, killing him instantly. 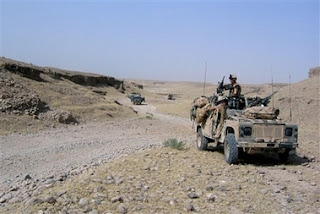 Thus, there were two vehicles involved, not one, both suffering mine strikes, the Pinzgauer, presumably, having been carrying the survivors from the first, when it too was hit.

The day before, Trooper Jack Sadler had also been killed in a mine strike, while acting as a gunner in a WIMIK. Earlier in his tour, Gardiner had been involved in the suicide bomb incident on his convoy, from which all the crews had survived.

While the advocates of unarmoured, high-mobility patrol vehicles will argue that mines (and IEDs) are an unavoidable hazard, it is hard to believe that the crew of the Canadian Cougar would agree, and that – for want of the protection that the types such as the Cougar can offer – the death of Cpl Gardiner and the injury of five others, was anything other than avoidable.