The women of Basra 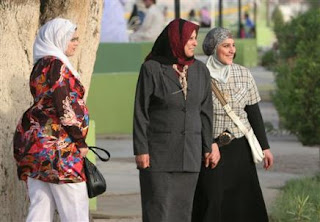 A propos the report by Sean Rayment which we examined in our previous post, The Times today offers an account of life in the newly liberated Basra, written by a female British journalist – on the spot in Basra.

That, in itself, is a measure of the success of the Iraqi Army operation. For a long time now, Basra has been off-limits to Western journalists and we have become used to reports by-lined from Baghdad, 340 miles away, relying on local stringers, telephone conversations and official press releases.

The journalist in question, Deborah Haynes (with additional reporting by Ali Hamdani), writes under the headline, "The men in black vanish and Basra comes to life", telling us that she is, "The first Western journalist to enter the city since Operation Charge of the Knights was launched a month ago".

She reports that young women are daring to wear jeans, soldiers listen to pop music on their mobile phones and bands are performing at wedding parties again. All across Iraq's second city life is improving, a month after Iraqi troops began a surprise crackdown on the black-clad gangs who were allowed to flourish under the British military. The gunmen's reign had enforced a strict set of religious codes.

This reinforces and builds on an AP story datelined 18 April which pictured (above left) women walking through the park in Basra. CD shops, we were told, sell love songs again, women hesitantly emerge from their homes without veils, and alcohol sellers are creeping out of hiding in this southern city where religious vigilantes have long enforced strict Islamic laws.

The changes in recent weeks, said the report, are signs that an Iraqi military crackdown against militiamen, particularly the Mahdi Army loyal to anti-US cleric Muqtada al-Sadr, has succeeded despite the troubles that plagued the offensive launched last month. 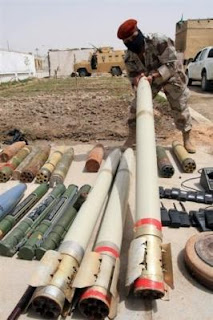 Separately, the MoD website recounts how British bomb disposal teams have been helping their Iraqi counterparts destroy hundreds of Improvised Explosive Devices (IEDs) and other munitions recovered from Basra City during the recent Iraqi led surge into the city.

Once again, this is supported by media reports (and pictures – right: note the Dzik in the background) which attest to the extraordinary amount of material which was seized by Iraqi forces.

Too much good evidence is now coming through to suggest otherwise that there has been a significant advance in this troubled city, with British and US officials tentatively acknowledging that a "turning point" has been reached.

In a separate, later piece, The Times also reports that, today, Moqtada al-Sadr - who has not seen in public for almost a year – has ordered his followers to refrain from fighting the Iraqi security forces.

The message, delivered on his behalf at a Baghdad mosque during Friday prayers, must be considered a humiliating climb down, especially after the contemptuous response from Condoleezza Rice to Sadr's threat to launch an "open war" against the Iraqi government.

Sadr is now claiming that his threat had been directed at US and British troops alone, adding that "there will be no war between Sadrists and Iraqi brothers from any groups."

Meanwhile, as US and Iraqi forces pushed on with operations to combat rogue elements of the Maedi Army and other armed gangs in the Shia stronghold of Sadr City in east Baghdad, operations are continuing in Basra, but Iraqi soldiers and police, The Times says, "are no longer facing much resistance."

UPDATE: The Sadr "climb down" was covered on the main BBC television news this evening - about 20 seconds, before the programme went on to air a long report about German TV taking the Allo-Allo comedy series. We are so lucky to have such a concerned, responsible public service broadcaster.