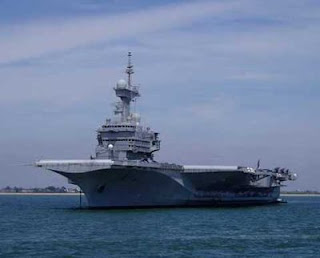 If there is muted discussion about the viability of the Royal Navy's "super carrier" project, not so in France, it seems.

"It is clear that the budgetary situation concerning the equipment of our forces makes the construction of a second aircraft carrier difficult," the minister told Europe 1 radio and the TV5 Monde television channel. "It's a decision that we will have to take in the coming weeks," he said, adding: "The president of the republic will decide."

Quite where that leaves the UK is anyone's guess, since the French have committed to a joint design, and possibly sharing construction with the British, driving down costs by producing three hulls instead of two.

That the French are even thinking of cancellation, however, rather reinforces our view that European defence integration is something of a paper tiger. When it comes to putting up the money, the Euros are simply nowhere to be seen.

After all, it was as recently as the summit at le Touquet in 2003 that Tony Blair and Chirac reaffirmed their St. Malo commitment to be able to maintain one battle-ready aircraft carrier group at sea at all times.

This was supposed to be in place by 2008 and with France currently operating just one carrier, the Charles de Gaulle (pictured), it looks the grandiose plans hatched by Blair and Chirac could be coming to naught. As always, when it comes to defence and European support, it will be ourselves alone.