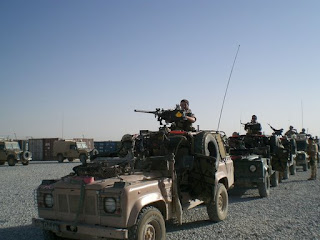 A written question submitted by Ann Winterton to the defence secretary has yielded an important and revealing admission.

Answered on 31 March by Bob Ainsworth, the question asked the secretary of state what plans he had "for procuring additional armoured cars." Said Ainsworth:

I am assuming "armoured cars" to mean lightweight armoured wheeled scout vehicles. We provide our forces with a range of vehicles spanning a wide spectrum of protection levels, mobility, profile and armament, depending on their tasks. Vehicles like the CVR(T), WMIK and Panther undertake the sort of tasks that armoured cars might have undertaken. We have no current plans to procure a light, armoured, wheeled scout vehicle.

The crucial part of the answer here – which was exactly why the question was asked – is the admission that the WIMIK Land Rover is one of the vehicles which currently undertakes "the sort of tasks that armoured cars might have undertaken."

In other words, tasks which successive generations of the military have allocated to dedicated armoured cars – and have done since 1914 – are now undertaken by a medium utility truck, fitted with two machine guns and protected by bolt-on armour, augmented by strap-on Kevlar pads.

We always knew it was the case that the WIMIK was performing the function of an armoured car, but it is useful to have the official confirmation.

As to the next stage, it does not take a genius – even a military genius - to work out that if there is a valid role for a light, wheeled armoured vehicle, then it would be best fulfilled by a vehicle designed specifically for the purpose. By any measure, that has to be better than using a converted truck.

For sure, military minds may work on a higher plane than those of us mere mortals. Who, for instance, could possibly begin to understand the pure brilliance of the logic of using vehicles like the Pinzgauer, where – in mine infested country – the driver position is set to maximise the risk of death or injury in the event of a mine strike.

But, since we are pathetic little creatures who so obviously lack the insights that enable us to discard nearly a hundred years of military wisdom, we really would like to know why, when there is still, self-evidently, a military role for the armoured car, the British Army insists on fulfilling it with a medium utility truck. Also of some considerable interest is why, when the converted trucks currently used are wearing out and need replacement, the British Army is replacing them with, er … more converted trucks.