What is wrong with Britain? 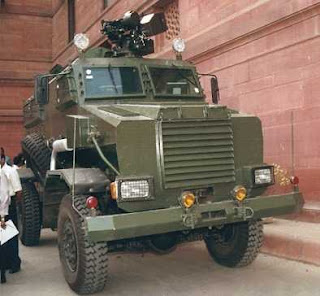 This is by no means India's first acquaintance with MPVs. BAE Systems has previously supplied 165 refurbished Casspir mine-protected vehicles to the Indian Army and, more recently, the Medak Ordnance Factory has produced an indigenous version known as the Aditya (pictured). So far 300 have been ordered and the Army has a projected requirement for 1,400 to provide increased protection to troops engaged in counter-terrorism operations.

The vehicle was developed with assistance from Israel and, so successful has it been that, we are told, the US defence department expressed some considerable interest in it. Meanwhile the Indians are showing interest in acquiring rights to produce the RAM 2000.

India's interest in the RG-31 and other types is, therefore, a further recognition of the role of mine protected vehicles – which are used widely in Kashmir and other locations. Its determination to build them locally indicates that the country recognises the strategic importance of local suppliers.

The irony of this is more than evident. Nominally, BAE systems is a British-owned firm which owns the RG-31 manufacturer, OMC. Previously, it was owned by Vickers and, before that, Alvis – one of the premier armoured vehicle manufacturers in the world. 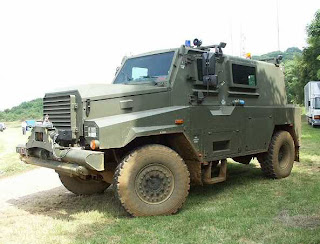 It was this company, Alvis which was instrumental in developing the RG-31 and, indirectly, the Tempest MPV (pictured), on which the Force Protection Cougar was based. This in turn provided the basis for the Mastiff.

Yet, it is to American firms that the British Army is forced to turn for its supply of protected vehicles, waiting in turn behind the US Marine Corps and the US Army, to obtain supplies – or looking further afield, not least to Israel, where interest has been expressed in the Golan.

Even now, though, the MoD is extolling the virtues of the Mastiff but, having announced an intention to purchase an additional 140 of these vehicles, has still not placed a firm order for them. And, of the new "Ridgeback" – rumoured to be a 4x4 version of the Force Protection Cougar – nothing has been heard since the initial announcement by Gordon Brown in December. The indications are that the UK is having to negotiate an early place in the queue, ahead of the massive orders from the US military which are under pressure to re-equip their own forces.

Given British expertise in the field, and the now pressing need for these vehicles – and the likelihood that even more will be needed – it would seem entirely logical that we could emulate India and find domestic manufacturers which could build – even if under license – suitable vehicles in the UK. Have we really got to the stage where we no longer need to produce our own armoured vehicles?