A powder keg waiting to blow? 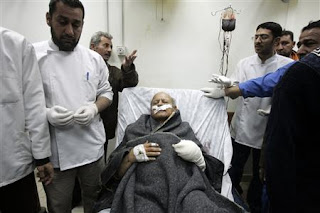 The way Basra and the activities of British forces in southern Iraq have disappeared from the media agenda should be remarkable, but it is not. That is the way the media work. When a subject is "on diary", the media crawl over it and then, when it is all done, the caravan packs its bags and moves on, deserting the issue which so preoccupied it, as if it had never existed.

We must be grateful, therefore, to The Observer yesterday, for giving us an insight into what is going on in what, for journalists (as well as British troops) is still a very dangerous place.

Not least, Reuters reports that the head of Iraq's national journalists' union was seriously wounded when gunmen opened fire on his car on Saturday, relatives and colleagues said. Shihab al-Tamimi, 74 (pictured), was shot in the face, chest and shoulder in the Baghdad attack.

What The Observer is telling us – under a headline: "Hopes of UK troop cuts in Basra dashed," is that plans to reduce the level British forces in Iraq still further have been shelved as security forces fear final showdown. A final all-out battle for Basra, we are told, is seen as 'inevitable' as persistent violence looks set to keep British troops mired in southern Iraq longer than was expected.

We already knew that the situation was unstable and the paper reminds us that an uneasy truce has been maintained between Iraqi security forces and Shia militia groups since Britain handed over control last December. We are also reminded that Gordon Brown announced that the number of troops in Iraq would be cut from 4,700 to 2,500 by spring. But, says the paper, "that timetable appears increasingly optimistic."

Certainly, we get the odd whiff that the violence is continuing. Last week, four British soldiers were injured, one seriously, by a roadside bomb during a night patrol – something about which the MoD have been somewhat less than forthcoming.

We also learn that three contractors, two Indian and one Sri Lankan, died on the British base after it was hit by 19 rockets in 24 hours. Two private security company staff were injured after a visit to the Basra Children's Hospital. And negotiations for the release of a kidnapped British photojournalist continue without a breakthrough.

It is, of course, a measure of the parochialism of the British press that, had the three dead been British, it would have been all over the papers, but since they were Indian and Sri Lankan, that does not merit a separate story – merely a passing reference in a longer piece. But, that the base is under continued – and what seem to be escalating – attack is significant.

Asked who runs the city now, Iron, who has been in Basra since December, says: "There's no one in charge. The unwritten rules of the game are there are areas where the army can and can't go and areas where JAM can and can't take weapons."

He added that General Mohan was keen to maintain the British presence. "Mohan's view is that having this force here - the tanks, helicopters, aircraft and so on - gives him power downtown. If there were no coalition forces here, his political power would be hugely damaged. If he is going to fight or face down JAM, he needs this back-up."

We also get a picture (which the MoD has not supplied) of how far the Basra base is being developed and fortified. Far from being dismantled, the 15 square mile base is getting a £12m military hospital and five rocket-proof dining facilities are under construction. A £4m barrier dubbed the "Great Wall of Basra", made of 13ft high concrete blocks each weighing 6 ton, will soon stretch five miles around the base.

What the paper calls a "siege mentality" is underlined by accommodation where beds are shoehorned between sandbags and 7.5-inch thick concrete blocks. Body armour and helmets are worn or within reach at all times.

One gets the sense – how accurate, it is impossible to tell – that Basra is a tinderkeg, ready to explode at any moment, although there will no doubt be some local signs of a building crisis.

Given our media's reluctance to keep us informed, we will be the last to know but, if the situation deteriorates badly and British troops are called upon to intervene, the government may find itself having to bring in reinforcements in a hurry. Perhaps also it will find that our troops sustain a casualty rate which brings the Iraqi war sharply back into focus.

Taken in the round, this surely must have an effect on our deployments in Afghanistan. Several media reports over the weekend suggested British troop levels there were to rise to 8,000, with suggestions that the Taleban were to be pursued into the hills, where they are finding temporary refuge. 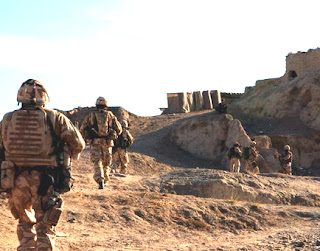 What is not reported clearly is the increasing engagement of US forces in the British Helmand sector. The taking of Musa Qala in December was only achieved with the intervention of heli-borne troops from the élite US 82nd Airborne Division. Now we learn that 2,200 US Marines being deployed to southern Afghanistan next month, where they will fight alongside British forces.

The primary target is reported as Garmsir, the scene in January 2007 of what we dubbed an "heroic failure" when British troops failed to recover the southernmost regional centre of the Taleban.

What is going to be interesting, therefore, is the interplay between the Iraqi and Afghani theatres, especially later in the spring when it is possible that British forces could find themselves heavily engaged simultaneously, with little in the way of reserves. From the current situation where media reports are thin on the ground, we may find an altogether different scenario.