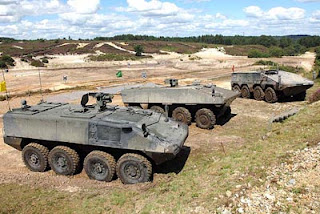 It really is quite incredible how otherwise sound commentators of the political scene fall apart when they venture into the realm of defence spending, and end up joining the pack to spout the same mindless drivel.

Thus do we get Iain Martin, normally one of the better columnists, holding forth in The Daily Telegraph under a catch-all heading of "Britain's defence spending is a disgrace".

Employing the usual "cut and paste" journalism technique, he relies on the ritualistic complaint of the government's failure to ensure "an adequate supply of body armour or night vision equipment", notwithstanding that, whatever problems there might have been, there are none in this department now. Whatever complaints troops might have had about equipment, it is readily acknowledged by expert commentators that they are basically satisfied with their personal kit.

Nevertheless, Martin employs this and then goes on to offer the usual mantra of "overstretch", then adding that our troops are "underequipped", all to build his case that Britain "spends too little on defence". He then adds that "none of the nation's parties is yet prepared to do much about it."

There is no point further in pursuing Martin's case as it culminates in a series of rhetorical flourishes which, effectively all amount to the same thing – that the answer to the malaise is more money.

Hence, we are back in the same territory that all such commentators find themselves in – suggesting more money, with absolutely no ideas about how that money should be spent, and entirely heedless of the experience of the NHS and other public services, which demonstrate beyond peradventure that simply throwing money at a problem is not always – or ever – a rational solution.

The trouble is, basically, that none of the commentators are prepared to do their homework, to develop their understanding or address any of the real issues in the Armed Forces. Therefore, they are unable to focus criticisms and then ensure that the money that is made available is well spent, and that the machinery exists for ensuring future funds are also properly used.

What evades them, therefore, is the thesis that we have so often offered on this blog that, to throw more money at the Armed Forces is akin to bankrolling a drunk because he has spent all his money on booze. If the MoD is misspending much of its funding, giving it more money will simply allow it to misspend on a larger scale.

The evidence of this is to an extent illustrated by our previous post where the expenditure of £166 million has yielded an overly expensive vehicle, the Panther FCLV which offers sub-standard protection and which, after nearly five years, is yet to go into service. Notably, the original order was for 401 vehicles, with an option to buy 400 more.

As it stands, the MoD has intimated that it will not take up its option – presumably for financial reasons. If the MoD was to be given more money and thus was able to buy those additional 400 Panthers, would the Army be better served?

This inadequacy of thinking is equally evident in the Telegraph news section, where the headline has it that "Spending cuts 'will put national security at risk'". Yet, this is nothing more than a pre-emptive strike from the Society of British Aerospace Companies, who are warning about the economic impact of any "cuts".

Here, their particular concern is that "economic stability and manufacturing jobs" would be jeopardised if military projects are cut, which is a fair enough point. But it should also go without saying though that the purpose of military procurement is to provide the fighting forces with the equipment they need, not to keep defence contractors in work. Only if there is a conjunction in those interests should the contractors' concerns have any weight. Whether there is such a conjunction in this current round of "cuts", though, is very dubious.

In a linked piece, The Telegraph tells us what projects are most at risk and these include the Joint Strike Fighter, where numbers ordered may be cut, the Type 45, where the seventh and eighth destroyers may not be ordered, and FRES.

Revealing the disconnect between the actual operational need and the aspirations of the contractors (as well as the Army chiefs), we are told that this latter programme, "is the most vulnerable to be cut but is probably the most needed."

Yet, only at the very end of its news piece does the paper convey the MoD view, that. "It is important that the MoD prioritises its resources to ensure that we are able to meet our current commitments as well as those that may arise in the future." And therein lies the crux of the debate, which the paper does not even recognise. FRES, for instance, far from being the "most needed", is the single project which is doing most damage to the Army's current capabilities.

Interestingly, it is the Financial Times which makes to effort to engage in that debate, having Sir Michael Quinlan, permanent undersecretary of state at the Ministry of Defence, 1988-92, declaring that, "We must question the case for aircraft carriers". He acknowledges that the defence budget is in trouble but also notes that the Treasury will not come to the rescue. "Nettles have to be grasped," he warns.

For Quinlan, it is the carrier programme that stands out, observing that, "If the case for these has been rigorously tested in Whitehall, little has emerged to outside view." He also notes that. "The Commons defence committee, though keenly interested in the procurement arrangements, has scarcely attempted deeper scrutiny. There has been no public debate as there was over the Trident force."

The broader point Quinlan is making here is important. There has been no public debate on the carriers. Nor, incidentally, has there been a public debate on FRES. The requirement has simply "emerged" into the public domain, with MPs and the media now taking it as read that it is what is needed.

It is the lack of "deeper scrutiny" that was the focus of the recent RUSI paper, mis-reported and mis-understood in The Telegraph and elsewhere. Under the title, "Risk, Threat and Security”, the authors main proposition was the formation of a "new structure of committees", within government and within parliament, to take the "widest view" of defence and security.

Without doubt, that "widest view" is what is lacking from the debate. It is entirely absent from the public discourse entertained by the media, which is ignoring complex and important issues and instead relying on its simplistic mantras.

Without that "widest view", the debate – such that it is - is thus ill-informed and largely sterile, contributing nothing to the security of the nation or the capabilities of our Armed Forces. The media - and indeed the politicians who so often rush to endorse the media line – are no better than the archetypal "man in pub".

Yet, writes Quinlan, "Britain cannot afford everything that might conceivably come in handy one day. Defence planning has to make choices that limit what we can do." Screaming and shouting for everything to be kept is the easy option, and that is what the media is doing. But we cannot afford to buy shiny new "toys", like FRES, simply because the generals say we must have them.

With a "final decision" on what cuts to make are – according to The Times, "some weeks or months away", there is still a window in which an informed debate could be conducted, but as long as we stick to the sterile narrative of "underspending" and "overstretch", we are going nowhere. Grown-up choices have to be made, and spending more is not one of them.