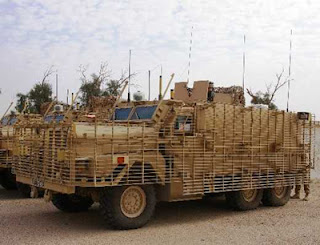 It appears that, after the inexplicable delay, the MoD has finally awarded the long-awaited contract to Force Protection for new mine protected vehicles – presumably definitely for Mastiffs.

The order is for 174 vehicles (34 more than originally announced), at a fixed price of $115,167,467 – roughly £335,000 each – which includes "associated test sets, spares and support services." In contrast to the exceptional speed with which the first batch were delivered, however, work is not due to be completed until July 2009 – only three months short of two years since the commitment to buy was announced by the MoD.

Presumably, some will arrive earlier, but all will have to be fitted with additional armour and equipment in the UK, before they are finally despatched to theatre – anything up to six months after delivery from Force Protection.

This leaves the Army still reliant on the Pinzgauer Vector, as its main "protected" patrol vehicle. Reports on this vehicle, though, indicate the Army may not be able to wait too long.

Apart from now showing a disturbing tendency to shed wheels, there are problems with engine overheating when the vehicle is under full load, and it is proving dangerously top-heavy. Further, troops are finding seat restraints for passengers are ill-fitting, creating difficulties when they need to exit the vehicle in a hurry.

Meanwhile, it seems the Italians are also buying mine protected vehicles from Force Protection. They have ordered ten, at a price of $8,353,715, again including associated support services and parts. The order comprises six 6x6 Cougars and four Buffalo mine clearance vehicles, scheduled for completion by July 2008 - a year before the British contract is due for completion.