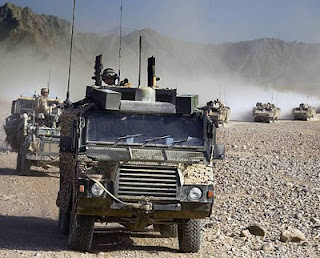 News came in this morning of another mine strike killing a British soldier in Afghanistan, with another five injured. The dead soldier, who has not yet been named, was from the Royal Electrical and Mechanical Engineers (REME), attached to 5 Regiment Royal Artillery.

According to the MoD, the vehicle in which the troops were travelling was hit by the mine approximately two miles north east of Musa Qala.

As is commonly the case, the MoD have not identified the vehicle, and are unlikely to do so. Informed sources are suggesting, however, that this was a Pinzgauer and possibly a Vector. Certainly, with the number of troops killed and injured, it seems unlikely to have been a WIMIK or a "Snatch" Land Rover.

If this was a Vector, it will have been the fourth of the type to have been involved in a fatal incident attributed either to a mine or roadside bomb (see here, here and here, in addition to which an unspecified number of troops have been seriously injured while riding in these vehicles.

The worst of it is that deaths were going to occur as a result of the dangerous vulnerability of the Vector was entirely predictable, it being obvious before even these vehicles were deployed that they were completely unsuitable for Afghanistan.

The MoD should never even have considered using them in what is often cited as the most heavily mined country in the world and one in which the Taleban, unable to confront British troops in an open fight and prevail, are increasingly resorting to ambush tactics (again a predictable development).

The problem for the MoD now is that, in the context of a theatre-wide shortage of patrol vehicles, it has no ready replacement. Since the announcement on 12 December of the purchase of 150 "Ridgeback" protected vehicles, nothing more has been heard.

Once again, therefore, troops are dying and destined to die simply because decisions taken in the past have led to the wrong vehicles being purchased, decisions which, at the time, have rarely been challenged. This blog is probably alone in questioning the purchase of the Vector.

That, in itself, underlines both the lack of attention to procurement issues and their vital importance. Decisions made so easily in the past cannot always be undone in the present. The Army cannot afford to get them so wrong.