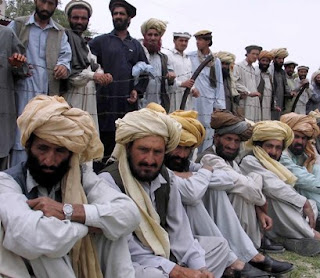 Adam Holloway MP is possibly a disappointed man. Having produced an excellent CPS pamphlet on our adventure in Afghanistan, the response of the media has been to "cherry pick" one small section from it, where he discusses the shortage of helicopters.

As for the broader themes entertained in his pamphlet, sub-titled "Towards realism in Afghanistan", there has been only one taker, the Press Association. No other media organisation (so far) has bothered to review his work. This is a pity, as it makes a genuine contribution to the debate.

In his pamphlet, Holloway reminds us that, in Afghanistan, soldiers and tribesmen have been dying in large numbers. Unknown numbers of enemies have been recruited to al-Qaeda directly because of a flawed and overambitious strategy, which works against the grain of Afghan society. We have been told that this is in our vital national interest in order to stop Afghanistan once again becoming an ungoverned space from which another 9/11 could be launched.

But, he says, the truth is that the country has become less governable. What has been happening is making the launching of 9/11s from elsewhere more likely. In that, he has common cause with Matthew Hoh, with Holloway also taking the view that, "Attempts to impose central government on a country with hundreds of deeply divided and independent communities are over-ambitious and likely to fail."

Perhaps what marks out Holloway's contribution though is that, unlike many commentators, he looks at the broader geopolitical picture. He thus remarks that the Pakistan establishment's biggest fear in the region is that a pro-Indian government in Afghanistan could open a second front in any future war with India. Pakistanis, he says, see the country through the prism of Kashmir and conflict with India. The key to the problem is far away – on the line of control that divides Kashmir.

Holloway also notes that the establishment fears of undue Indian influence have "been fuelled by India's reopening of its consulates in Jalalabad and Kandahar and by the activities of the Indian Border Works organization in implementing infrastructure contracts in Afghan provinces close to the Pakistani border."

There is no mention made of the deals with Iran, but his thinking is very much in line with ours, in identifying India as one of the main problems in the region.

We would disagree though, with Holloway's assertion that "only the US could bring the sort of pressure needed on India, and long-term reassurance to Pakistan," to resolve the matter. Britain, as the ex-colonial power, has a significant role to play but probably the only answer is to call upon regional powers if there is be any hope of a settlement.

That aside, where Holloway does score is in his eight recommendations, the key being that rather than follow the McChrystal formula of reinforcing failure with yet more troops, he prefers reducing the military footprint, merely maintaining a framework on the ground and assets in the country to find, fix and strike anyone presenting an international threat.

Also crucial, we must understand the legitimate concerns at the heart of Pakistan's security establishment, but also need to be more discrete in our assistance to them. Clearly, although he does not specifically make the point, Holloway seems to understand that overt Western assistance is energising Pakistani domestic terrorism.

Then, writes Holloway, we must strike a political deal with as many of the "insurgents" that are prepared to come on board, and back up the deals with a "generous reintegration programme".

This is a little woolly, as the man earlier remarks that the Pashtun population and the Taliban are one and the same. But he talks about "multiple local fixes with local groups and tribes and sub-tribes," which seems to suggest that he is looking to re-introduce the colonial system of bribery, which is probably one of the answers. It would be far better to work with, not against, the grain of Afghan society, he says.

For his concluding remarks, Holloway tells us that we should focus on what we can actually achieve, not what we think would be rather nice to achieve. There is always, he says, going to be some level of insurgency in Afghanistan, but we need to manage it, not fuel it. We should not reinforce failure. Instead, we should have a long look at why we are failing.

He thus finishes with the sentiment that maintaining our partnership with the US is vital to the UK's national security. Protecting our population from terror attacks is our first duty: picking fights with tribesmen in southern Afghanistan is not. And that, of course, is what we are doing. On their turf, we cannot win. Holloway has formally added himself to the list of those who have seen the light.