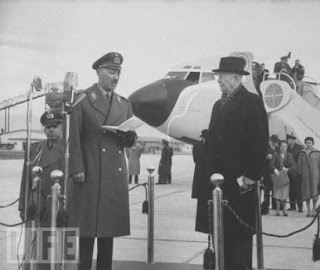 Having briefly returned to the Iraqi war, we come back to our review of Afghan history. Before our diversion, we were exploring the US incursion into Helmand Province but, before that, we had left the general history in September 1953 when Lt-Gen Mohammad Daud Khan had just taken over the post of prime minister.

In many ways, Daud's take-over was a classic part of the Afghan cycle which characterises the history of this nation. Not only do we see the interplay of tribal politics (if that is what it can be called), we see also the long-standing tension between the push for modernity and the forces of conservatism.

Daud's predecessor, Shah Mahmood, had been from the "liberal" wing. He had introduced a number of reforms, which had included free parliamentary elections and the introduction of a free press. His period of rule had also seen the emergence of a number of political parties, developing in the Western mould as a free opposition.

Daud, therefore, represented the forces of reaction, where many of the freedoms introduced were withdrawn and many of the activists in the emergent political groups were forced to flee abroad. But his innate conservatism was perhaps reinforced by the fact that he was a strident Pashtun nationalist, dedicated to the reunification of the tribes across the Durand line, making Pakistan his natural enemy.

In waiting, he had formed his own ultra-nationalist party called the Union for the Freedom of Pushtunistan which then became the National Club, which formed his political base on assumption of power.

With tension between Afghanistan and Pakistan still high when he took office, Daud was not the man to calm things down. Moreover, his antagonism towards that neighbour could hardly have been calculated to win him support from the United States, which had emerged the dominant regional power, replacing the vacuum left by the departure of the British.

At the time, the US focus was very much on the Cold War, the priority being to create a band of sympathetic states surrounding the USSR to contain its expansionist tendencies. From Turkey on the fringe of Nato, the US had recruited Iraq, Iran and, on the south Asian flank, Pakistan, which provided both a bastion and a listening post into India, which was falling into the Soviet sphere of interest.

In 1959 Pakistan and the United States signed the Bilateral Agreement of Cooperation which provided for assistance to Pakistan in the case of aggression and, by the late 1950s Pakistan allowed the construction of a then secret air base in Peshawar, from which U-2 intelligence aircraft made reconnaissance flights over the Soviet Union.

Daud could hardly have been unaware of the close if somewhat troubled relationship between the US and Pakistan and one therefore wonders what was in his mind when, in pursuit of is his own preoccupation – the modernisation of the Army – he approached the US for assistance.

Having made his hostility towards Pakistan so clear, he surely cannot have been surprised when it was denied – although some contemporary documentation suggests that his expectations of support were slight. It is said that it was always his aim to draw closer to the Soviet Union. In so doing, he was seeking to play a dangerous game, exploiting the tensions of the Cold War by playing off one superpower against the other.

This was a game the USSR was prepared to play. In 1954 it provided $3.5 million in economic aid to build grain silos and a modern bakery in Kabul – with one bakery elsewhere. These were high visibility projects, completed quickly – unlike the longer-term US project in Helmand – and did much to raise the profile of the Soviets as benefactors.

Alongside that, funds were provided for modernising the Army, together with offers – which were quickly accepted – to send officers to Soviet military academies for training. Grants were also provided for students and government officials to study in Soviet institutions, the aim being to build a sympathetic clientele amongst the ruling élites.

Even then, Daud kept his options open. By March 1955, relations with Pakistan had deteriorated to such an extent that the border was closed and it was to remain so for five months. But it was to the US and its client Iran that Daud turned for help, requesting the US to facilitate access to the Iranian port of Chabahar close to the border with Pakistani Balochistan.

Given the role of Pakistan in the US strategic plan, again it seems entirely unrealistic of Daud to have expected US intervention, and it was not forthcoming. But, whether expected or not, the Afghan government had no choice but to request a renewal of their 1950 transit agreement with the Soviet Union, allowing goods to be shipped through Soviet territory.

Ratified in June 1955, it was followed by a new bilateral barter agreement. After the Soviet leaders Nikolay Bulganin and Nikita Khrushchev visited Kabul in 1955, they announced a US$100 million development loan for projects to be mutually agreed upon. Some $25 million was also provided for military aid and the Soviets agreed to build military airfields at Bagram, Mazar-e-Sharif, and Shindand.

Internal politics in Pakistan at the time were hardly settled and 1958 brought a military coup to that country, with power assumed by General Mohammad Ayub Khan. Arguably, this might have afforded Daud an opportunity to repair relations with his neighbour, but they did not improve. In early 1959, the Afghan foreign minister went to Pakistan for talks, but the mission had not been success and differences between the two countries became more noticeable.

The immediate result was that Afghan propaganda in Pakistan territory intensified and, after some delay it was countered with Pakistani propaganda beamed at Afghani listeners. As relations worsened, the Afghans took to official harassment, refusing to grant – for instance – residence permits to Pakistani nationals.

Finally, in September 1960, there were armed incursions in Pakistan by Afghan irregulars disguised as tribesmen. In May 1961, a similar force launched an abortive raid in support of the Nawab of Dir, on the Pakistani side of the Durand line.

In August 1961, Pakistan, citing harassment of its consulates in Jalalabad and Kandahar, shut down those missions. At the same time it demanded that Afghanistan should close its missions in Parichinar, Peshawar and Quetta, on the grounds that these were fomenting sedition in Peshawar. The Afghans, on 6 September 1961, broke off diplomatic relations and the border was closed.

Propaganda then gave way to actual fighting. The Afghan government offered bounties to Pakistani Pashtuns for each empty shell case and grenade pin claimed to have been used in battle against regular Pakistani forces, and also provided replacement munitions. These were believed to have been financed by the USSR.

The border closure for Afghanistan was potentially disastrous as two of Afghanistan's major export crops, grapes and pomegranates, were ready to be shipped to India. Seizing the opportunity to extend its influence, the Soviet Union stepped in and undertook to buy the crops and airlift them to hteir destinations. What the Soviets did not move, Ariana Afghan Airlines flew to India in 1961 and 1962.

At the same time, the United States attempted to mediate the dispute, although its ties with Pakistan were a stumbling block.

In addition, much of the equipment and material provided by foreign aid programs and needed for development projects – particularly in the Helmand Valley Project - was held up in Pakistan. Another outgrowth of the dispute was Pakistan's decision to close the border to nomads (members of the Ghilzai, variously known as Powindahs or Suleiman Khel), who had long been spending winters in Pakistan and India and summers in Afghanistan.

The Pakistani government statement denying the decision was related to the impasse with Afghanistan appeared disingenuous, and the issue added to the brewing conflict between the two countries. Afghanistan's economic situation continued to deteriorate. The government was heavily dependent upon customs revenues, which fell dramatically; trade suffered; and foreign exchange reserves were seriously depleted.

This was a situation which could not continue and, as the dispute dragged on in 1963 it became clear that neither Daud nor Ayub Khan of Pakistan would yield; to settle the issue one of them would have to be removed from power. Despite growing criticism of Ayub among some of his countrymen, his position was generally strong, whereas Afghanistan's economy was suffering.

In March 1963, with the backing of the royal family, King Zahir Shah sought Daud's resignation. Because he controlled the armed forces, Daud could have resisted the king's request, yet he went quietly. Muhammad Yousuf, a non-Pashtun, German-educated technocrat who had been minister of mines and industries became prime minister.

For a brief period then, Zahir Shah took direct rule, in what was known as the "constitutional period", when once again the country entered on another cycle of liberal reform. However, Daud had already done a great deal of damage. In opening up the country to Soviet influence, he had paved the way for the Communist revolution which was to tear the country apart in 1978.

As significantly, through his antagonism with Pakistan, he had distanced his country from the United States, the only country which could perhaps have countered the Soviets.

Furthermore, the US was not prepared to take over the colonial role from the UK and would not intervene in the dispute between Afghanistan and Pakistan – despite a direct appeal from Zahir Shah when Eisenhower visited the country in 1959 (pictured). Relatively modest financial aid was the limit of its involvement, leaving a dangerous geopolitical void.