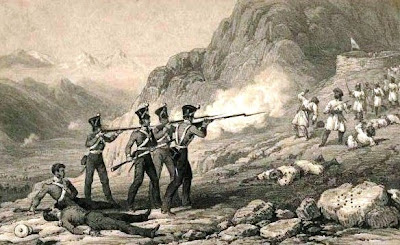 In October 2009, we saw a survey of more than 50 servicemen who had fought in Iraq and Afghanistan. It concluded that the 5.56mm calibre rounds used by British soldiers "tailed off" after 300 metres yet half of all Helmand firefights are fought between 300 and 900 metres.

We were told that the British soldier couldn't attack the Taliban "with any certainty that if he hits the enemy he will kill or incapacitate him." The study thus claimed that, for want of a rifle with a longer range, Javelin anti-tank missiles, costing £100,000 each, were often fired at lone gunmen.

If we now go back to 1844, we find a "narrative of the late victorious campaign in Affghanistan" by Lt Greenwood, retailing the account of the British punitive expedition under Gen Pollock, in the wake of the slaughter of Elphinstone' army during its retreat from Kabul in 1842.

Amongst the other things Lt Greenwood had to say, he passed comment on the accuracy and range of the rifle fire from the tribesmen, remarking:

It is astonishing at what an enormous distance the fire from their long rifles is effective. Our men were continually struck with the Affghan bullets, when we could reach the enemy with nothing under a six-pounder. Our muskets were useless when playing long bowls.

The fact is, our muskets are as bad specimens of fire-arms as can be manufactured. The triggers are so stiff, that pulling them completely destroys any aim a soldier may take; and, when the machine does go off, the recoil is almost enough to knock a man backwards. Again, the ball is so much smaller than the bore of the barrel that accuracy in its flight, at any considerable distance is impossible. The clumsy flintlocks, also, are constantly missing fire.