The shadow of history 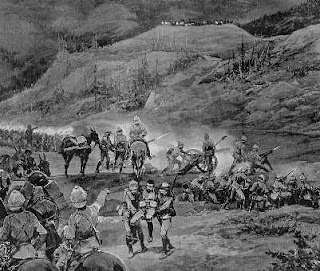 While the world awaits with bated breath the announcement tomorrow from president Obama on his intentions for Afghanistan, coverage of the campaign has been relatively muted – although the traditional scaling down of campaigning as winter approaches doubtless has had some influence on the flow of news.

For my part, some little time ago I decided to step back from the day-to-day reporting and look at the history of the benighted land that is Afghanistan, filling in some woeful gaps in my knowledge. In some respects, I wish I had not started, as the broader appreciation not only underlines my own state of ignorance but also brings home the complexities of the strategic picture.

From the latest piece, however, is the very clear reminder that, ever since the partition of India and the creation of Pakistan in 1947, Afghanistan and Pakistan have been enemies, with the tribal areas and the Northwest frontier territories being at the centre of the dispute.

The crucial issue is the unrecognised border set in 1893 as the Durand line, which is as fresh an issue now as it was then. Even more recently, Karzai has made recovery of these lands an important part of his overall political platform.

This historical perspective puts a completely different light on some the current initiatives, not least the development of the supposed AF/PAK policy, which assumes that Afghanistan and Pakistan can and will work as allies in pursuit of a Western-inspired "war on terror", against the common enemies, currently designated as the Taliban and al-Qaeda.

In fact, as the recent Pakistani adventure in South Waziristan has highlighted, there is no single "Taliban". More to the point, there are different tribal factions which are fighting out a proxy war between Afghanistan and Pakistan, the whole overlaid by a global jihad which positions the Pakistani and Afghani governments as puppets of the "great Satan", the United States of America.

It is in that context that we must look at reports of the recent meeting between UK premier Gordon Brown and president Zardari of Pakistan, where the British prime minister is said to have voiced his frustration over Pakistan's apparent lack of commitment to the fight.

Much of this frustration is focused on the failure to capture Osama bin Laden, with Brown, in common with Hillary Clinton, wanting to see proof that not just the Pakistani Army but the entire government machine was committed to his capture. Brown is said to have told Zardari that much greater effort is required in Islamabad, reminding him of where Britain's interests lie, with three quarters of all plots against Britain masterminded in Pakistan.

But, if Mr Brown is frustrated, he should perhaps have regard to the Zardari's own problems, not least of which is that, the more he is seen to be supporting the Western agenda, the more resistance he is likely to meet from his own people.

The Pakistan government is having to steer a precarious course between pandering to its Western paymasters and dealing with the internal stresses which threaten to tear the country apart. A more aggressive focus on the tribal areas could bring the government down, or precipitate a military coup.

Underlying Brown's demands, therefore, is a fundamental ignorance of the fragility of the situation in Pakistan but, even more so, there is a colossal hypocrisy.

The British government is seeking from Pakistan a resolution of a problem which it, itself failed to solve – the taming of the frontier regions. Moreover, this is a problem which the British made inestimably worse, with the creation of the Durand line, its failure then to regularise the position in 1947 and its continued failure, alongside the US, to mediate in the ongoing dispute.

And therein really does lie the issue. Until the border issue is resolved, nothing fundamentally is going to change in a region which, traditionally, the Afghans themselves called Yaghistan (the land of the unruly).

Thus did Abdur Rahman, ruler of Afghanistan when the Durand mission did its work, write to the Viceroy of India, warning him of the dangers of splitting the peoples of the tribal areas. "If you should cut them out of my dominions," he said, "they will neither be of any use to you nor to me: you will always be engaged in fighting and troubles with them, and they will always go on plundering."

Within seven years, Rahman was to be proved right, with the British having to put down major uprisings, dealing with the Chitral (pictured), Bajaur, Malakand, Waziri and Afridi wars. And, having dumped the problem on the Pakistani government, history is repeating itself.

The irony is that, with the current coalition policy of expanding the Afghan Army, Rahman was arguing back in 1893 that the "brave warriors" of the tribal regions would "make a very strong force" and that only a ruler of Afghanistan could "make them peaceful subjects". Divorced from Afghanistan, they are the problem – within Afghanistan, they could be part of the solution.

Yet, while Mr Brown is laying down the law to president Zardari, this issue is not even on the table. To his cost, the British prime minister will find that, in this region, you cannot ignore the shadow of history.