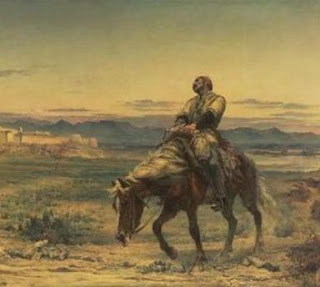 As the Afghan conflict continues to exert its bloody effect, we have been exploring further the prospects of success of what is fashionably called a "counterinsurgency" campaign, in which the target is the people, the aim being to protect the people from the insurgents and to convince them to support the government.

Although we have already looked at some of the historical background to the conflict, it seems that its roots stem not from recent history but from events spanning the last 300 years.

From those events, one learns, the main antagonists – the Pashtuns - are not insurgents in the classic sense. They are a separatist movement, seeking to restore the boundaries of their ancient territory, the modern name for which is Pashtunistan, encompassing areas of Afghanistan and Pakistan.

Our problem is that we have not fully understood that, traditionally, the very term Afghan is used to describe the Pashtun, who have a recognisable identity going back as far as 330 BC, if not before. The polyglot ethnic mix which encompasses the modern Afghanistan is a geographical construct rather than a nation.

Within that, though, is another separate and hugely important (and largely unrecognised) dynamic – the rivalry between the Pashtuns themselves, centred around the two main tribal groups, the Durranis and the Ghilzai. The modern history of Afghanistan is largely an account of the battle for power between two great dynasties, with the story effectively starting in 1709 and continuing to the present day.

For some time before 1709, most of what is now known as Afghanistan was occupied by the Persians and it was the chief of the Ghilzai Pashtuns - a man by the name of Mirwais Khan Hotak – with his followers, who rose against them in Kandahar City in 1709, to establish the Hotaki dynasty. This successful uprising established the basis of the modern Afghanistan and, briefly, controlled part of Persia itself.

The Hotaki Ghilzai dynasty, however, was replaced by Ahmad Shah Durrani, who founded a rival regime, the Durrani dynasty. This established a tension between the two groups which exists to this day.

What then followed is equally significant. At the time, the capital of a Pashtun-dominated Afghanistan was Kandahar. After the death of Ahmad Shah in 1773, he was succeeded by his son Timur Shar, a weak and inept ruler. Unable to govern effectively, and opposed by the fractious Ghilzai Pashtuns, in 1775, he moved his seat of government north to Kabul in an attempt to enlist the support of the Tajiks and other northern ethnic groups, better to control his own people.

This then sets the scene for another dynamic which resonates to this day. The traditional capital of Afghanistan is Kandahar, not Kabul. To the Ghilzai, in particular, rule from Kabul is forever associated with a Durrani ruler, using "foreigners" to impose his will.

And, in what is almost a repeat of history, we have Hamid Khazai, a Durrani president, ensconced in Kabul, supported by an Afghan Army composed mainly of Tajiks. To complete the historical parallel, the fighters in the Taleban "insurgency" are primarily Ghilzai tribesmen - led by Mullah Omah, a Hotaki Ghilzai.

Then, as now, Ahmad Shah failed to impose his will over the whole of Afghanistan and, by 1818, his successors controlled little more than Kabul and the surrounding territory within a 100-mile radius. By 1836, the Kandahar region and the Ghilzai heartlands were virtually autonomous.

What then appeared to change the course of history, apparently setting Afghanistan on course to becoming a modern state, was the emergence of another strong man. This was Dost Mohammad Khan, yet another Durrani Pashtun who, after the deposition of the then current ruler, Mahmud Shah Durrani - who had taken the throne in 1809 – had been "awarded" first Ghazni and then Kabul in 1826. He went on to defeat his rival in a battle under the walls of Kandahar in 1834, making him the effective ruler of Afghanistan.

By then, the British had appeared on the scene, with their own colonial ambitions, anxious to thwart Russian ambitions and protect the borders of the English Raj. Initial overtures to Dost Mohammad soured, and when he moved to entertain a relationship with Russia, this triggered the First Anglo-Afghan War.

In 1838, British forces occupied Kabul to depose Dost Mohammad and make him prisoner. However, while the retreat from Kabul and the destruction of the expedition in 1842 is part of the current mythology, on which the legend is built that no Western army can ever subdue Afghanistan, this was by no means the end of the war.

Later in 1842, the British actually launched a punitive expedition. Entering Afghanistan by the Khyber pass, an "army of retribution" under General Pollock marched on Kabul, joined there by 6,000 men from Kandahar destroying the famous covered bazaar of Kabul on 9 October. Three days later, the English withdrew from Afghanistan.

It was that which actually put an end to the war, leaving the UK victorious and the dominant power in the region but one temporarily resolved not to interfere in the internal politics of Afghanistan.

Dost Moḥammad was released and received in triumph at Kabul. He re-established his authority but, in 1846 he renewed his policy of hostility to the British and assumed an expansionist policy encroaching on British Indian territory. Three years later, though, after a series of defeats, he abandoned this policy, returning to Afghanistan where he devoted his energies to extending his control over the whole of this land.

To do so, in 1855, through the Treaty of Peshawar, he concluded an alliance with the British government, each proclaimed respect for each side's territorial integrity, and pledged both sides as friends of each other's friends and enemies of each other's enemies. By 1862, with the aid of the British – including generous subsidies - Dost Moḥammad had defeated a Persian army and had taken Kandahar, dying a year later shortly after capturing Herat. However, unity there was not. The Ghilzai refused to accept Durrani rule and control over the central mountain regions and the east was at best intermittent.

In historical context, this sets up another "folk" memory. Then, as now, we see the British, as a colonial power, supporting a Kabul-based Durrani ruler, attempting to exert control over unwilling Ghazi tribesmen.

This, of course, is by no means the end of the story – which has many more twists and turns, which we will explore in a later post. But, when we view the course of the current conflict, the historical parallels are absolute. Dealing with primitive and largely illiterate tribesmen, isolated from the rest of the world, their oral history is as fresh with each new telling as it ever was.

Whatever our grand aspirations, our intentions and our broader strategic objectives, the Ghilzai Pashtuns are reliving their own history. It should thus come as no surprise that when earnest young coalition officers solemnly tell tribal elders that they are from "the government" – i.e., Kabul – representing a Durrani president supported by Tajik soldiers, the "hearts and minds" message rather gets lost in translation.