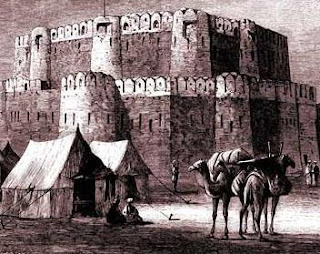 In our previous piece, we looked at the influence of Afghan history on the current conflict. We concluded that there were three elements which were relevant.

Firstly, the war is a continuation of the tribal rivalry between the two major tribal groups, the Ghilzai and the Durrani/Barakzai, which effectively started in 1709 when the first Ghilzai dynasty was founded. Secondly, the movement of the capital from Kandahar to Kabul in 1775 positions that city as the seat of the oppressor (certainly to the Ghilzai). Thirdly, give the historic support for the Durrani, against the Ghilzai tribes, British and by association all coalition operations are seen as partisan players.

Our previous romp though the history of Afghanistan, however, only took us to 1863, with the death of Dost Moḥammad, a Durrani leader who, with the help of the British, had extended the rule of Kabul to much of the territory currently occupied by the modern Afghan state.

On the death of Dost Moḥammad, there was no clear successor, leading again to a familiar period of strife, from which emerged his son, Ser Ali. With the considerable support of the British – again highlighting the powerful role of this colonial power in the region - he fought his stepbrothers to regain the throne in 1868, to become Amir (King) of Afghanistan.

This, though, was a period during which the so-called "Great Game" was being played out between Britain and Russia, with the latter extending its territories into central Asia, its eventual ambition to extend southwards through Afghanistan, into Baluchistan and thence to the Arabian Sea on the Makran coast, giving the Russian empire a much-coveted warm water port.

This "Great Game" aspect forms the fourth layer, as it still heavily influences the modern Afghan view of the outside world, the friction arising from the determination of the great powers to treat Afghanistan as a pawn, seeking to control its external (i.e., foreign) policies, combined with a failure to respect its territorial integrity.

This period, however, cannot be understood without reference to British politics which – then as now – dominated the approach to this region. The crucial event here was the emergence in 1859 of the Liberal Party, the premiership of Lord Palmerston in 1865 and of Gladstone who led the government intermittently from 1868 until his death in 1894.

Heavily influenced by the philosophy of laissez faire, strengthened by the 1857 Indian uprising, Gladstone took the view that Afghanistan should be treated as a buffer state, with minimal British interference and support, other than the supply of money and arms. This was the start of what became known as the "Frontier Policy".

Yet this was the time of considerable Russian activism on the northern borders of Afghanistan so that, by the time Sher Ali had established control in Kabul in 1868, he found the British – still nominally bound by the 1855 Treaty of Peshawar – unwilling to assist him against the Russians.

Unsurprisingly, over the next ten years, relations between the Afghan ruler and Britain deteriorated steadily, with Russian encroachment proceeding apace. Diplomatic attempts in 1872 brought an agreement from Russia, brokered by the British government, to respect the northern boundaries of Afghanistan, which – without any commitment from the British to enforce it – the Russian proceeded to ignore.

Two years later in 1874, however, the Liberal government in London had been deposed by the Tories under Benjamin Disraeli, who adopted foreign policy that was determinedly aggressive, in terms of the Raj being described as the interventionalist "Forward Policy".

Whether Sher Ali was fully – or at all – aware of this fundamental shift in British policy does not seem to be recorded. But, with the Russians knocking at his northern gate, he accredited a Moslem agent of the Czar in Kabul in 1875, and in July 1878 General Stoletov arrived without advance notice to negotiate a Russo-Afghan treaty.

Driven by his interventionalist master in London, the British Viceroy of India, Lord Lytton ordered a diplomatic mission to travel to Kabul on 14th August with an ultimatum, requiring the Afghans to install a British mission in Kabul.

When the mission, under General Sir Neville Chamberlain, was turned back at the frontier and Sher Ali concluded a treaty with Russia, this triggered the Second Anglo-Afghan War. On 21 November 1878, the British dispatched three different columns totalling 30,000 men through the Bolan, Paywar and Khyber passes, into Afghanistan.

Only the second column met with some resistance. Jalalabad and Kandahar were occupied without fighting. With his capital threatened, Ser Ali fled, leaving his son Moḥammad Yaqub as regent. The Amir went to Bactria where he hoped to receive aid from the Russians, but they had been diplomatically isolated in Europe since the Berlin Congress (1878) and offered nothing.

A broken man, Ser Ali died a shortly afterwards, on 21 February 1879. The new Amir Yaqub, with his country occupied by the British, was forced to sign what was regarded as the "humiliating" Treaty of Gandamak on 26 May 1879. In exchange for a guarantee of territorial integrity and an annual subsidy for the Amir, Afghanistan lost control of its foreign policy and ceded the strategic districts in what is known as the Northwest frontier area. The treaty also required that an English resident be accredited in Kabul.

However, the first holder of this post, Sir Louis Cavagnari, was assassinated by mutinous Afghan soldiers forty-seven days after his arrival, on 3 September 1879. Yaqub was suspected of complicity in the massacre of Cavagnari and his staff, was forced by the British to abdicate. 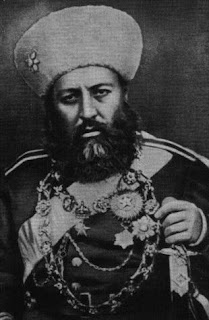 The British considered a number of possible political settlements, including partitioning Afghanistan between multiple rulers or placing Yaqub's brother Ayub Khan on the throne. Instead, they decided to install his cousin Abdur Rahman Khan (pictured) as Amir, despite the fact that the Russians supported him, reasoning that he would be stronger ruler.

Ayub Khan, who had been serving as governor of Herat, rose in revolt with an army of 25,000 men and defeated a British detachment at the Battle of Maywand in July 1880. He then besieged Kandahar. General Roberts then led the main British force from Kabul and decisively defeated Ayub Khan in September at the Battle of Kandahar, bringing his rebellion to an end.

All that was left was for the British to require Abdur Rahman to confirm the Treaty of Gandamak, leaving the British in possession of the territories ceded by Yaqub and in control of Afghanistan's foreign policy. Abandoning the provocative policy of maintaining a British resident in Kabul, but having achieved all their other objectives, the British withdrew from Kabul and the rest of Afghanistan, apart from Kandahar, where a garrison was kept until April 1881, when it was occupied by Abdur Raḥman's troops.

Meanwhile, in April 1880 back in Britain, there had been a viciously-fought general election, resulting in a route for Disraeli's Tories, in which his "expensive" and "immoral" foreign policy had been roundly attacked. Gladstone again swept into power, resulting in another change in policy. For Afghanistan, the "Frontier Policy" once again prevailed, the country resuming its role as a buffer-state between British India and Russian Turkestan.

The hands-off policy allowed Abdur Rahman free rein in his own territory. A grandson of Dost Mohammad Khan, he was another Durrani Pashtun, from the Barakzai tribe. For him, the Ghilzai were unfinished business. Faced with a rebellion of the tribes, he responded with ferocity and, by the end of 1887 had crushed the uprising.

He then set about a massive resettlement programme, dispersing their tribes into non-Pashtun areas, mixing them with other ethnic group and diluting their power and influence. He exiled over 10,000 Ghilzai families to areas north of the Hindu Kush, forcing them into areas with predominantly non-Pashtun populations, crushing more than 40 revolts in the process. He also restricted the movement of the nomadic tribes, requiring them to seek government permission before they could relocate.

By the time he died in October 1901, the "Iron Amir" was the undisputed ruler of Afghanistan, having beaten off all rivals broken down the power of local chiefs, and tamed Ghilzai. But, as a despot, stained by a reputation for unnecessary cruelty, he also left behind him a legacy of hatred.

For all that, he had been enthusiastically supported by the British, who lavished generous subsidies on him and kept him well-supplied with weapons. In return, in 1893, he agreed to the partition of the Pashtun tribal areas along the Durand line, attracting the eternal enmity of the hill tribes.

In a culture where, as we have remarked before, literacy rates are low, the tradition of oral history exerts a powerful effect. To many of the Ghilzai tribes, these events are as of yesterday. They remember a cruel, despotic leader, imposed on them by the British by the force of arms, who proceeded to crush their tribes and engage in what amounted to ethnic cleansing, then splitting their tribal heartlands and handing a huge area to the British.

Where folk memories are long, and history is a fresh as the day the narrative is delivered, the duplicitous British are as much the enemy as the Durrani they supported. And we aim to win the "hearts and minds" of these people?