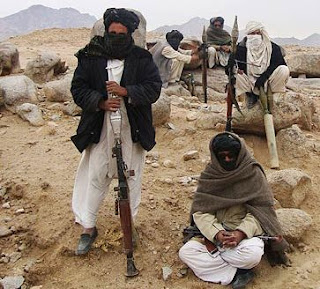 ... reinventing the wheel. The Times is running a story headed: "Army tells its soldiers to 'bribe' the Taleban", revealing that a new army field manual published yesterday is telling British forces to buy off potential Taliban recruits with "bags of gold".

The edicts, which are contained in rewritten counter-insurgency guidelines, will be taught to all new army officers. They mark a strategic rethink after three years in which British and Nato forces have failed to defeat the Taliban. The manual is also a recognition that the Army’s previous doctrine for success against insurgents, which was based on the experience in Northern Ireland, is now out of date.

Hilariously, we have Gen Newton, Assistant Chief of Defence Staff Development Concepts and Doctrine, telling us that "new ideas" were needed to cope with the media-savvy insurgents who are fighting in Afghanistan and that there was no place for arrogance on the part of the British military hierarchy, relying on their experience of past campaigns.

Yet, in the bribery stakes, it is the Italians who have been ahead of the current field. It was only in October however, that the media was waxing indigent about the discovery that their forces in charge of the Sarobi area, east of Kabul, had been "been paying tens of thousands of dollars to Taleban commanders and local warlords to keep the area quiet."

However, as we noted at the time, the payment of "bribes" or "subsidies" to Afghan tribes for good behaviour is a well-established tradition and had by the early 50s developed into a highly formalised system, copied from the Raj and administered by the Pakistani government in the tribal areas after partition.

In this system, there was a hierarchy of payments which started with the maliki. This was a hereditary allowance to the head of a tribe, paid subject to "good conduct" of the heir of the Malik (head of the tribe), and approval of the government.

There was also the lungi, a personal allowance for individual service, which could be modified on the death of the lungi holder, and then there were mawajib allowances which were paid to the entire tribe biannually.

The important feature of the system was that it involved continuous payments, the purpose of which was "to maintain amicable political relations with the tribes, to bind them to the government of Pakistan by excluding other 'influences' and hence outside interference in the area." It was found that one-off payments had little effect.

Now that the Army is being officially sanctioned to make such payments again, we are back in the days of the Raj, revisiting techniques which had been introduced over a century ago, which have provenances very much older.

Not everyone agrees that the newly discovered system will work. Tory MP and former army officer Adam Holloway says the idea is a matter of "shutting the door after the horse has bolted". He adds that he knows that a number of generals thought in 2006 that, rather than send a British brigade to Helmand, they should buy off people in the tribal areas. "Now," he says, "it's too late."

Holloway is not wrong. As we have already recorded, the tribes have already built up a structured system of their own, involving illegal taxation, tolls, extortion and protection, from which they generate substantial revenues. The amount of money the Army can deliver locally will be struggling to compete with such riches.

Furthermore, there was another side to the "bribery" system. In the event that the tribes failed to deliver on their side of the bargain, a punishment system was in place, most often involving collective punishment, ranging from the imposition of fines on the errant communities to village burning - and latterly aerial bombing.

But there was still another component. Payments - and very often decisions on punishments - were made by a network of "political officers", career officers in the service of the Raj, who had an intimate knowledge of the peoples, the languages and the political terrains. With the best will in the world, short-tour Army officers cannot hope to replicate the skill and experience of these men, and risk blundering in to situations about which they know little, doing more harm than good.

Thus, only a "carrot and stick" process, guided by highly experienced political officer, has any chance of working. Even then it was not particularly successful. As it stands, we will simply be throwing good money after bad, possibly feeding the conflict rather than resolving it.