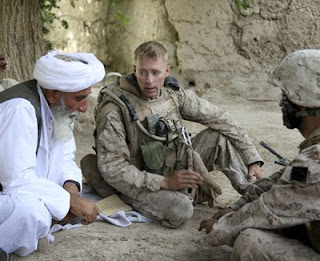 With due respect to Lt-Col Gus Fair DSO, the CO of the Light Dragoons battle group, this officer has lost the plot.

That is one of the comments to his piece in The Daily Telegraph, where the Lt-Col tells us that our soldiers' sacrifice in Afghanistan "will be worth it". The progress he has seen "proves that we can win the war and help create a better society." And the commentator is not wrong.

Lt-Col Fair cites as his primary evidence the experience of the Light Dragoons, which have just finished deploying for the second time. On the previous occasion, in 2007, they were fighting for control of Garmsir, at the very edge of the Afghan government's sphere of influence. The main administrative centre was derelict, destroyed by months of fighting as they battled to assert control of the ground only a few hundred yards outside the front gate.

In April this year, they returned and the progress was "beyond all of our expectations". After the intervention of the 24th Marine Expeditionary Unit (pictured), the area had been transformed. Some 15,000 "Afghans" now live in relative safety within an area protected by a joint coalition and Afghan team. Most importantly, it is led by an Afghan district governor "who exercised control in a fair, representative and transparent fashion."

What Lt-Col Fair does not say, though, is that Garmsir is inhabited largely by Durrani with rival Ghilzai tribes to the north and south. His district governor is a Durrani, serving a fraction of the 74,800 people in the district, the majority of whom are Ghilzai. The Lt-Col and his men have walked into a 300-year-old tribal war, weighing in on the side of the Durranis against their rivals who are fighting under the Taliban franchise.

What applies here, though, also applies to the wider Babaji area, an area of operations further north, the clearance of which was part of Operation Panther's Claw. But Fair and his troops share a "firm belief" that they will see similar if not more rapid progress in Babaji by the time the regiment next returns to Helmand.

With that, Fair believes the Taliban "is an increasingly self-serving organisation that has lost sight of its aim; it has no honour and is undermining both the reputation of Islam and the deeply honourable Pashtun traditions." In the eyes of the Afghans in Babaji, he writes, the Taliban has crossed from insurgency to running a predominantly terrorist campaign, targeting not only ISAF troops and Afghan security forces but also the Afghan population itself.

The locals, Fair goes on to say, "definitely do not want a Taliban solution if there is a viable alternative" and he thus believes "we are at or will soon approach a tipping point in the consent of a critical mass of the locals." Beyond this point, he further believes "consent will move irreversibly in our favour, provided we remain determined to exploit the opportunity it presents."

Here, one must admire the confidence and optimism, but also worry about it. Within this area, there are probably about thirty different tribal and ethnic groups, plus a smattering of settlers – mostly former itinerant workers.

That rather begs the question: who are the locals? Of whom does Fair refer when he talks about Afghans, and who amongst those are approaching the fabled "tipping point". And what of the rest?

Therein lies the problem. One gets the sense, almost of a "Cowboys and Indians" narrative, redefined as "Afghans and Talibans", with no hint that there is any understanding of the vast complexity of the tribal and ethnic mix, the rivalries, the shifting loyalties, the feuds, treachery and jealousies. The tribes, sub-tribes and clans are poorly mapped and, in contemporary literature, rarely mentioned. Yet they are the key to understanding the conflict.

Arguably, if – as definitely seems the case – Fair and his colleagues are favouring the Durrani, who will tend to be more supportive and approachable, then they will be creating enemies elsewhere, strengthening historical enmities and stacking up trouble for the future.

Yet, based on his experience in Garmsir and the progress achieved so far in Babaji, Fair is more "confident than ever" that this [the Afghan conflict] is a winnable campaign. One would like to believe this, but we are not getting any indications that the military is even close to understanding the conflict, much less winning it.