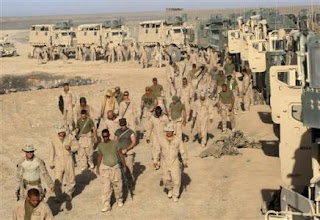 Scene of the abortive rescue attempt of a Royal Marine in January 2007 by troops carried on the outside of Apache attack helicopters, after a failed attack a Taliban fort in Jugroom, Gamsir province is now the centre of a massive operation by US Marines.

According to Reuters, in a dawn attack yesterday, the Marines stormed the provincial capital, which goes by the same name of Gamsir (sometimes spelt "Garmser"). A substantial force was deployed, estimated by The Times at about 2,400. The action started on Tuesday, with the troops securing routes into the town in the south of Helmand province, the world's biggest opium producing region and a hotbed of insurgent activity.

The Guardian has it that the Marines landed before dawn yesterday, some trundling in on Humvee trucks and others arriving by helicopter. Within a few hours, insurgents armed with guns and rocket launchers poured out of a local madrasa, sparking fighting that lasted several hours. 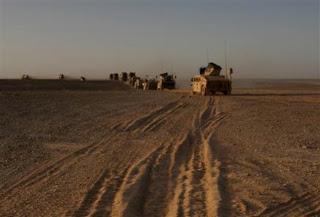 The Taleban - who claimed to have hundreds of fighters in the area, entrenched in a series of pre-prepared defence - responded with small arms fire and rocket-propelled grenades. They failed to inflict any casualties. The combat, says the paper, petered out by late morning after US helicopter gunships pounded suspected Taliban positions with rockets. Casualty figures were unknown.

The Guardian also says the operation was coordinated with the British military, which has a fortified base in the town and several outposts in surrounding areas. Scottish infantrymen, it tells us, provided covering fire as the Marines passed through their lines, while British commanders coordinated surveillance of Taliban movements.

According to US Marine spokeswoman Captain Kelly Frushour, the Marines are now in control of the town centre.

The news of this success, which has eluded British forces, comes a day after The Daily Telegraph published details of a downbeat confidential Foreign and Commonwealth Office paper, which listed “a catalogue of problems and weaknesses in Western attempts to stabilise the country.”

In a list of "critical areas to fill", the paper claimed that Nato still needed three infantry battalions, more helicopters, more aircraft and more training teams to help the Afghan army. Intriguingly, it also raises concerns about the situation after November, when the US Marines currently engaged in the Garmsir operation are to be withdrawn from the south. 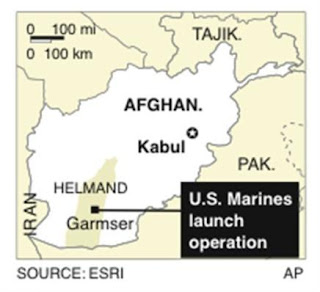 That latter concern is presumably now less pressing. The presumption had been – without any evidence to support it – that the assault on Garmsir would have been held over until 16 Air Assault Brigade was fully in place, to give the publicity-hungry Paras a chance of the glory, of which they had been deprived by the capture of Musa Qala by 52 Infantry Brigade last December.

With the US Marines declining to wait, they now have the opportunity to pacify the region and, it is anticipated, to push the Taleban back to the Pakistan border in Helmand, assisting the control of Taleban infiltration at the border.

Nevertheless, this being a US success – albeit in the British sector – it has received considerably less coverage from the British media than the abortive attempt on the Jugroom fort in January 2007. It has been largely overshadowed by news of Prince William’s flying visit to Afghanistan, a visit that has been dismissed as a publicity stunt.

However, the action is another defeat for the Taleban, which is losing its grip over Helmand province and is now failing to prevail in any direct military confrontations with Nato forces. And now the hard work or reconstruction begins.