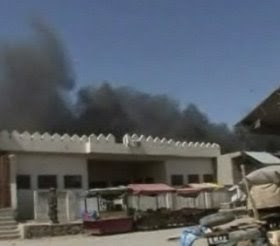 Although we have recently seen six British soldiers being killed in a period of seven days, little attention has been paid to what, on the face of it, could be rapidly deteriorating security situation in Afghanistan.

However, with the controversy over MPs' expenses in full spate, it was only The Independent which offered any serious analysis, suggesting in its Saturday edition that people in this country were bound to ask: "what are we trying to achieve there? Can it be done? And is it worth it?"

Actually, few people seemed to be asking that. If ever there was a "forgotten war", it is the campaign in Afghanistan, where – as was the case with Iraq – most of the publicity is confined to reports of soldiers being killed. Nevertheless, The Independent concluded that the campaign was "a worthwhile mission", although it expressed some reservations about taking the fight to the Taliban too aggressively, putting civilian lives at risk.

This was a reference to the frequent use of air strikes, with the paper suggesting that the war, "needs to be pursued with steadiness and a better understanding of how the Taleban operates in both Afghanistan and Pakistan." It added: "It has to be hoped, after eight years, that the international forces now have that understanding. If they do not by now, they never will."

One can see the point – causing civilian casualties is counter-productive. But, when it comes to "aggression", it would be nice to think that, if the paper had any sway with the other side, perhaps it could prevail on the Taleban not to take the fight to the coalition forces "too aggressively".

Such a stance would have been welcome last Tuesday (12 May) when eleven Taleban suicide bombers attacked government buildings in the eastern city of Khost, on the border with Pakistan.

The assault began around 10 a.m. when a suicide bomber in a burqa attacked the governor's compound in the city. That blast was followed soon after by a suicide car bomb explosion. Then a team of six suicide bombers tried to attack the nearby police headquarters, but were rebuffed by security forces, including US forces who had been attending a nearby meeting.

The bombers then entered the neighbouring municipality building where three bombers detonated their explosives, while other Taleban took 20 city employees hostage. US and Afghan forces later stormed the building, freed 20 hostages and killed three insurgents. Khost residents were forced to hide from booming explosions and running street clashes that lasted until 5 pm. At least eleven Taleban and nine others - including police and civilians – died.

That same day, in the Aftabachi school in Kapisa province, north east of Kabul, less aggression would also have been appreciated. Only a few dozen of about 570 female students had attended their school, after an apparent attack with poison gas had sickened more than 80 girls. This was the third apparent poisoning at a girls school in about two weeks, attributed to the Taleban attempting to prevent female education.

Furthermore, this is by no means the only area where education is under stress. A report from Lashkar Gah district has the Helmand provincial minister of education complaining that outlying schools are "a target of extreme Islamism", making easy targets for Taleban who are blamed for the closing of 75 of the 228 schools in the district.

The authorities, therefore, are struggling to deal with an influx of 3,000 students who have "transferred" to the city schools, due to the murder of teachers and students and the burning of eight schools in the last year. Teachers are having to cope with makeshift tents because the existing schools are not big enough to take the additional pupils.

The provincial capital is one of the "security bubbles" maintained by coalition and Afghan security forces, but this situation indicates that the outlying districts are far from secure.

Nor indeed is the city of Lashkah Gah free from threat. After the attempted take-over in October, the Taleban were trying again last Thursday, aiming – it seems – to replicate the mayhem they had caused in Khost.

But, in what must count as a success for the security forces, the authorities were warned of about 30 Taleban assembling outside the city and were able to call in air strikes to forestall the attack. The AFP news agency records that 22 Taleban were killed, six of them known commanders. One assumes that The Independent will not be too upset about this aggression.

This was the same day that Marine Jason Mackie was killed in the area, while travelling in a Viking. We have no information as to whether the incidents were connected. However, we are told that US Air Force F-15E Strike Eagles conducted strafing near Lashkar Gah on that day. The strike took place "during a firefight in which a friendly military vehicle was destroyed" and, we are also informed that the jets carried out shows of force as an unheeded deterrent prior to engaging enemy forces.

In fact, "air" had been quite busy that week in the Lashkar Gah area. On 12 May, a coalition aircraft flew shows of force over Lashkar Gah after Taleban fighters shot at a friendly convoy. The firefight ended once the aircraft arrived. Later in the day, a UK Royal Air Force GR-9 Harrier performed a show of force over a compound where enemy personnel were firing at Afghan security forces, suppressing their fire.

Then, the day after the abortive attack on the city, a UK Royal Air Force GR-9 Harrier conducted a show of force to put a stop to an enemy ambush. Enemy personnel had opened fire on a friendly unit with rifles and rocket propelled grenades. Later on, a B-1B Lancer flew a show of force to disperse a group of anti-Afghan forces personnel massing for attack.

That was the Friday and while this "aggression" was undoubtedly successful, airpower was not able to save Khost from another attack. On that day, Xinhua reports, the Taleban fired four missiles into the city, killing three civilians and wounding six others. One missile landed in Mosque, near a NATO military base.

Later though, in what The Independent might consider rather too aggressive, US-led forces killed five armed Taleban in the nearby Gorbaz, as they were carrying weapons on camels.

On the Saturday, however, a US Air Force B-1B Lancer carried out a show of force which ended an attack near Lashkar Gah. Taleban were firing at Afghan national police personnel and quickly fled the area when the bomber arrived.

Yesterday, it was reported that the Taleban attacked a police post and killed six officers in southern Helmand. Also, in neighbouring Zabul province, an Afghan army soldier was killed by an IED and three others were wounded. Elsewhere in the country, five police officers were killed when the Taleban attacked police in Nimroz province of south western Afghanistan. Over 2,000 Afghan police officers have been killed in 2007 and 2008.

Clearly, there is too much aggression here. If only all sides would listen to The Independent, the problem would be sorted in no time.