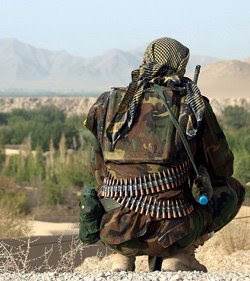 Penetrating the closed – and frequently inept – minds of the MoD publicity team is a task best not attempted by the faint-hearted. But, to judge from their output on Afghanistan, no lessons have been learned from Iraq and the same dire publicity model is still in place.

The latest example of this is seen on the MoD website, where we get classic tale of derring-do from "Our Boys" in a style that would put snake-oil salesmen to shame.

That is not in any way to denigrate our troops, or to question their dedication – merely the treatment of their activities by the MoD publicity machine. For, what the very stupid people in this department do not seem to be able to understand is the a constant diet of gushingly-phrased "good news", in the absence of context and without any reference to the things that did not go so well, is not information but propaganda.

And so you might say that it is not the job of the MoD website to put the whole picture. It's job – certainly in the view of the team – is to put out a positive message, countering the negativity of the media. What they seem to forget is that this site is financed by the taxpayer. PR is fine for private sector corporates, but the duty of a tax-funded site is to provide public information, not "spin".

In this case, the "positive message" covers the week-long Operation Zafar, conducted recently by the Mercian Regiment and elements of the Afghan National Army, to push the Taliban out of several villages in the area of Basharan, close to Lashkar Gah. This seems a logical extension of Operation Sond Chara which began in mid-December last year, aimed at cleaning the Nad-e Ali district.

That operation itself, planned at short notice after the attempted take-over of Lashkar Gah by the Taleban in the October (described by the MoD as "recent attacks") was publicised without any real explanation of the broader strategic context. That is again the case with Operation Zafar. It "plops" out as a stand-alone operation, with no indication that it is part of an overall plan – if indeed it is.

But then, this is not about informing the reader. The message we are supposed to take from this piece is immediately evident from the framing, which heavily emphasises the role of the ANA (and the ANP), complete with a glowing testimonial from Mercian CO, Lt-Col Simon Banton. He tells us that, " … the Warriors of the Afghan Army proved to be seasoned fighters and fought hard to provide security in this part of their own country."

Later from Lt-Col Banton, we also get: "This operation was another example of the progress being made by the Afghanistan National Army. They proved to be flexible, committed and brave. On more than one occasion it was touch and go as the enemy fought hard but the Afghan Warriors did not retreat."

All this may be true, but it also has the hallmarks of an I/O (Information Operation), the nature of which was revealed by author Stephen Grey, where the coalition PR machine sought to convey that the operation to recover Musa Qala had been ANA-led, even to the extent of hiding coalition men and vehicles for the photographs of Afghan forces raising the flag in the town after it had been stormed by US and British forces.

A very similar PR strategy was adopted during the Iraqi occupation, with the spin machine taking every opportunity to talk up the capabilities of the Iraqi Army, even when it was evident – and later proved – that the formations being hyped were seriously deficient and incapable of independent operations. The ulterior motive, of course, was to pave the way for the withdrawal of British troops, predicated on the legend that the insurgency there was an "Iraqi problem", which needed an Iraqi solution.

Such a view of this current operation may be overly cynical and even wholly distorted, but candid views are hard to find. However, we do occasionally get some clues, and the video (above) tells you a great deal more. The MoD has its reality, but it does not necessarily belong to this planet.