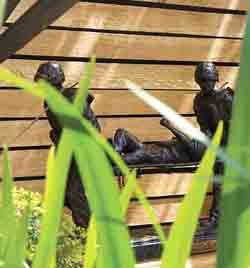 Keeping us fully up-to-date with events, the MoD website is offering a piece on a "healing garden" winning a medal a Chelsea Flower Show.

If that is not to your taste, you can read how 2 Rifles' Sangin base gets a new healthcare centre. Then, hot news on the MoD Afghanistan blog is a heart warming story about how ISAF has provided "humanitarian aid to flood victims".

All these pieces come under the generic heading of "UK military operations" but if you actually want details of military operations, you have to go to the US official website. There we find that "intense fighting between troops and militants has unfolded over the past few days", the location being in Marjah, 12 miles south west of Lashkar Gah.

This appears to be of sufficient significance for it to merit a report by CNN News and it even gets a mention by the UPI press agency, it relying on the CNN report.

These sources indicate that US forces are doing the fighting, with the intelligence that more US troops were moving into the area, with the caution that "civilians should get out of the way".

To simple, ill-informed souls like ourselves, who were labouring under the impression that Lashkar Gah District was a British area of operation - with 42 Commando recently having recently completed Operation Aabi Toorah in Marjah - the heavy US involvement comes as something of a surprise.

However, the US involvement no doubt explains why neither the MoD nor the British media are bothered about reporting the fighting. But we should perhaps have picked this up earlier, except that such detail comes via the USMC - which we did not expect to be the primary source on operations in the British area. But there it is, in a bulletin dated 8 May, detailing the deployment of what are expected to be 8,000 US troops in Helmand by the end of May.

Interestingly, this will herald other changes, as rules of engagement "have been adjusted fairly recently" to allow soldiers to destroy poppy crops. This marks a clear change from British policy, where hitherto crops have been left standing and the harvesting unhindered.

According to ISAF, "recent successful operations against the insurgents in the area have prompted a build-up of militant forces and a spike in militant activity" with "significant" quantities of narcotics having been seized. There was, ISAF maintains, a "clear link" in Marjah "between the narcotics trade, corruption and the financing of the insurgency." The narcotics trade helps pay for weapons, bombs, and suicide bombers.

According to one report, at least 25 Taleban fighters have been killed, while three days ago, an air strike led to an all too common tragedy. Eight civilians, allegedly being used as human shields, were killed after a bomb was dropped on a Taleban position to help "ISAF troops" extract from heavy fire.

The airpower summary for the day reports Air Force A-10s and an F-15E Strike Eagle conducted strafing passes and releasing a GBU-12 in an undisclosed location. During the fight, we are told, ANA forces called off an A-10 strafing attack due to concerns that enemy personnel were hiding amongst local civilian women in an apparent attempt to provoke aircraft to harm them. The aircraft instead performed a show of force to disperse the enemy.

Near Sangin, we are also informed, where troops are blessed with their new healthcare centre, an RAF GR-9 Harrier dropped a Paveway guided bomb in the centre of a compound from which anti-Afghan gunmen were pouring fire on friendly ground troops. Harrier also performed a show of force to allow a friendly unit to withdraw from the confrontation. That "healthcare" may well be needed.

More and more, however, it seems that US forces are taking over the fighting, lending support to the claim that ISAF now stands for "I Saw Americans Fighting". But there is no truth to the claim that, as regards the British, it now means "I Slunk Away Frightened".

As US operations begin to dominate the fighting in Helmand, however, what little news we were getting in the British media – and via the MoD – seems to have dried up, hence the MoD news from Chelsea Flower Show. What the Americans make of that is anyone's guess but, so irrelevant now is the MoD to information provision that it might as well devote its site to gardening tips.