Another day ... another GBU 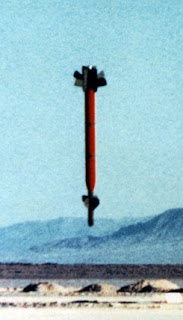 Looking at the latest instalment of the venture that is set to cost the British taxpayer some £3 billion this year, even we find ourselves raising our eyebrows slightly at the latest available airpower summary from the USAF. This tells us of the events in that haven of security and peace that is Lashkar Gah, in Helmand province, Afghanistan, where our blood and treasure are so freely expended.

From this source, we learn that, on 30 April a US Navy F/A-18C Hornet responded during firefights between anti-Afghan forces and combined Afghan national army-coalition units in the vicinity of Lashkar Gah. The jets employed GBU-12s to hit enemy positions in response to their mortar, RPG and automatic weapons fire.

In the same area, a coalition aircraft strafed an enemy improvised explosive device team. The aircraft engaged after detecting anti-Afghan personnel setting up a "daisy-chained," multiple-explosive IED. The aircraft used guns rather than a precision bomb to prevent damage to the roadway.

A Navy F/A-18E Super Hornet executed a show of force over anti-Afghan forces shooting at a coalition unit in order to suppress their fire. When the enemy shooters were not deterred, the jet hit their position using a GBU-38. Some surviving enemy personnel continued firing, but fled after the jet performed an additional show of force.

Of course, "the problem with all information that the military releases to the public, like the US Air Power Summary, is that it does not contain the context necessary to interpret its information appropriately."

For that, one presumes, one must imbibe the latest MoD press releases telling us how wonderful things really are (if there were any). After all, we get Super Hornets screaming up the High Street in Wibsey virtually every day, dropping GBUs and strafing the pub-goers as they spill out onto the road after closing time – so we should not take much notice of these "out of context" reports.

Alternatively, we could rely on another "ill-informed" and "out-of-date" journalist, this one James Palmer writing for the New Jersey Star Ledger newspaper.

Palmer, in fact, is writing what could be taken as an upbeat piece, charting the construction boom in Lashkar Gah. He finds "dozens of sprawling new villas" springing up, each with "gleaming glass windows, wraparound balconies and gabled rooftops that sit behind tiled walls." Then there are, "towering hotels and vast commercial centres, sturdy piles of fresh brick sealed with thick slabs of mortar."

The headline to the piece, however, gives the game away: "In Afghan construction boom, reflections of corruption", it reads. Palmer tells us that town residents and local officials offer two reasons for the boom: drug trafficking and government corruption.

"Many of these new big houses and commercial buildings belong to high-ranking government officials and drug smugglers," says Mohammed Enwar Khan, who heads a group of elders acting as liaisons between residents and the government, commonly known as the provincial council. Khan says the link between their illegal activities and their wealth is an open secret here, saying simply, "Everybody knows this."

Another local, Ramazan, a 48-year-old mechanic, who adds that the drug traffickers and crooked politicians are enriching one another. "Everything here depends on money and power," he says. "The smugglers have the money and the officials have power."

Then we get Sadar Wali, a 30-year-old poppy farmer from Helmand's Nawa district. He offers a sobering explanation of how the Taleban now work: "They tax our crops however much they want by sending notes to the houses," Wali says. "If you don't pay, they will accuse you of spying for or working with government and kill you."

That much and more from Palmer tells you that the glowing picture of "peace and stability" in the so-called "security zones" is an illusion. The Taleban move freely within the town, running extortion rackets, intimidation, murder and kidnap, many of the incidents not crossing the radar of the coalition forces safely ensconced in their fortress on the edge of town.

And of course, as long as the farmers pay their "taxes" to the Taleban, and the drug lords building their new palaces in the town pay their homage, the Taleban do not trouble them. They do not foul their own nest, indulging in their violence out of town where, occasionally, they meet Navy F/A-18E Super Hornets in full flight.

One wonders, incidentally, whether the author is the same James Palmer who last October wrote a piece for The Guardian describing how the once showcase project, the $190m Kandahar to Kabul highway had become the most dangerous stretch of road on the planet.

Government and military officials, recorded Palmer, say insurgents and bandits regularly pull travellers from their vehicles, murdering or kidnapping them for ransoms. Corrupt government security forces seek bribes and collaborate with insurgents and robbers. Roadside bombs frequently target Afghan police and military patrols, along with Nato convoys. No one in an official capacity can even quantify the violence.

Thus, what started as the road to recovery has turned into a highway of terror in Afghanistan. A project that was to bring economic prosperity has become a symbol of failure. The road is littered with burned-out green police pick-up trucks, 4x4 vehicles, Nato supply trucks and demolished bridges.

No doubt Palmer is "ill-informed". His piece is undoubtedly now "out-of-date" and, in any case, to draw any conclusions from his information is to take it "out of context".

However, what is interesting about Palmer's road experience is that we have been there before. In a number of remarkable studies of the Russian occupation of Afghanistan, one in 1988 and the other in 1995, produced by the US Army, graphic accounts were offered of what the Russians called the "highway war" - dorozhnaia voina.

In these studies, it was reported that the favourite tactic of the Mujahedeen guerrillas was to interdict the movement of troops and supplies of all types over the limited road network throughout Afghanistan. Interestingly, that was also a favourite tactic of the Viet Minh in French Indo-China during the 1950s, with epic convoy battles on the infamous RC4, with accounts chillingly similar to those written by Russian troops twenty years later.

Unsurprisingly, this carried over into the Vietnam conflict with both the Viet Cong and the NVA adopting the same tactics. In 1968, however, after a major loss, it was then realised that, far from being a drag on operations, convoy and route protection should be used as an opportunity to bring the enemy to battle on favourable terms, defeating them in detail in the war of attrition that characterises counterinsurgency operations.

As was later recounted in the current counterinsurgency doctrine, "A change in thinking about a logistic problem converted the perception of convoy operations from an unglamorous defensive activity into a valuable opportunity to offensively engage elusive insurgents."

What is staggering, therefore, is that in 2008, thirty years after the Russian experience, and forty years after US tactics were adjusted to deal with similar threats, our modern, technological, "superbly equipped" coalition forces are still getting caught out.

It is not that the Taleban have suddenly adopted new, especially effective tactics. They are simply doing what the Mujahedeen did before them and, before that, the Viet Cong and the Vietminh. What has changed is that our own forces have forgotten the lessons of their own history, and ignored the lessons and experiences of others, even to the extent – with the Americans – of their ignoring their own doctrine manual.

So it is with the "take and hold" strategy which the British so proudly proclaim and hold up as an example of progress in Lashkah Gar. The Taleban simply move in, in "mufti", change their tactics and prepare to wait for the day when some anonymous bean counter decides that the level of troops is no longer needed. Then, the Taleban, who never left and never changed, simply pick up their weapons and takeover … again.

As we write in our latest response to the troubled "Praetorian", success in dealing with insurgencies comes when people begin to see the balance of advantage in supporting the government as greater than in supporting (or tolerating) the insurgency.

If on the one hand, the people see the coalition forces creating their "security bubbles" in the towns, which merely create the conditions for the drug lords to flaunt their wealth, while the Taleban range freely, practising their extortion, kidnap and intimidation under the noses of the authorities; if the people see that the coalition cannot even protect the main transport routes; and if the people see the rural hinterland become the playground for free-range F/A-18C Hornets and the like, this is not an insurgency which is going to be defeated.

Such is the situation though that any "debate" requires us to agree wholeheartedly with the authorities, otherwise you are branded "negative" and "defeatist". On the other hand, we see political and public disengagement, media indifference, and MoD concealment, plus criminally inept strategy and procurement.

Meanwhile, we have allowed ourselves to become a bit player in our own destiny and our national security is now entirely in the hands of the United States. And their answer is, another day, another GBU – with, all too often, dire results.