Playing games in the bubble 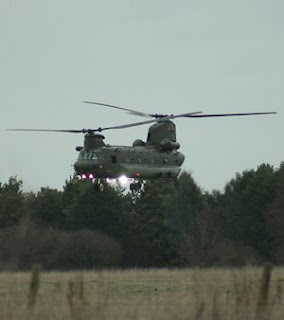 We do not hear so very much about "joined-up thinking" in government these days – presumably because it has been given up as a lost cause. For the gentlemen (and ladies) in the House, however, their task is to mount a general oversight of the affairs of government, which presumably gives them the opportunity to take a wider perspective of issues.

That, unfortunately is not the case. Our wise and dedicated MPs, it seems, fall into exactly the same trap as our masters, thinking along tramlines, totally unable to deal with the bigger picture.

Yet another classic example of this inability is today’s much-hyped report from the Commons Public Accounts Committee on the great Chinook disaster – a project started in 1995 which has left us with an expenditure of £422 million for eight aircraft, which originally cost £259 million and have yet to fly operationally.

For sure, it is the job of this committee to examine high expenditure projects and draw conclusions from them – and this the committee has done again. It has already visited this project several times. But what it is not entitled to do – and does not assist by so doing – is to draw lurid conclusions which are not supported by the evidence or for which there are other inferences to be drawn.

However, you can immediately see that the line taken by Edward Leigh, the chairman of the committee, is calculated not to bring any light to the subject but simply to create an opportunity for grandstanding. This we see in the publicity, which has The Times reporting "'Troops put at risk' by MoD blunder in deal for Chinooks" and The Daily Telegraph telling us that MoD "Chinook delays 'endanger' troops".

Here, there is a link between the shortage of helicopters on operations and the fact that troops are often as a result required to use less safe modes of transport, exposing them to risk. And there is a case to be made that the absence of helicopter lift was a direct factor in a number of deaths in Afghanistan.

Not least, there was the death of Jack Sadler, killed by an explosion as he was riding in a Wimik while escorting a slow-moving convoy of guns which could have been quickly and efficiently delivered by helicopter.

But the point here is that these deaths occurred ten years or more after the original Chinook order, and many years after 2001 when it was evident that the project was going belly-up. The fault, therefore, lies in the failure then to make alternative provisions for airlift to make up for the shortfall of capacity represented by the non-availability of these machines.

On this, we have charted endlessly the availability of alternatives and pointed out that there were many different options that could have been taken. That the MoD consistently refused to take up any of these lies at the heart of the airlift shortage.

But what is sinister about this, and Mr Leigh's pathetic attempts at self-aggrandisement, is that this issue was explored in the oral questioning by the committee. Led by Ian Davidson, we see this exchange:

Q138 Mr Davidson: Was there nobody else, Australia, New Zealand, anybody else at all from whom we could have borrowed stuff?

Sir Bill Jeffrey: The truth is that in the two significant campaigns that we, the Americans, the Australians and others are engaged in, helicopter support resources of this kind are at a premium. In fact, there is in my view a strong need to persuade NATO allies in particular to be ready to deploy their own helicopter capability on their own account. At the point in time you are referring to, we did explore with Americans in particular and we found it just was not possible.

Q139 Mr Davidson: In the same way that it would appear the French want to borrow our aircraft carriers, if you read the front page of The Sun—and it must be true because it is in The Sun—there was nobody from whom we could tap helicopters at the time then?

Sir Bill Jeffrey is currently Permanent Secretary for the MoD, its most senior civil servant, made a Knight Commander of the Order of the Bath (KCB) in the 2007 New Year Honours List. It cannot be said of Sir Bill that he actually lied. Most probably, there was nobody from whom we could have borrowed helicopters. But there were most certainly many opportunities to lease helicopters. Jeffrey was being somewhat economical with the actualité.

However, had Davidson been better briefed – or had he or any other members of the committee got off their idle arses and done some homework – they could have picked Jeffrey up on this, and got to the bottom of the issue.

This is not what our gilded MPs are all about these days. As long as Mr Edward Leigh can get his name in the papers with a lurid headline, the committee has served its purpose. As for ensuring that our troops are properly equipped, so that they do not have to die, well that is hardly of any importance at all.

But, if we want to play Mr Leigh's games, it is useful to note that, buried in the oral evidence – but not highlighted by the media – were some interesting snippets of information. The original request from the RAF for Special Forces helicopters was formally made in 1994, for the CH-47E (more correctly, the MH-47E). This was turned down by the then defence procurement minister, on cost-cutting grounds. From that stemmed the decision to adapt the eight HC Mk2s, a decision which led directly to this procurement debacle.

And the minister who made the decision? Ah! The Conservative colleague of Mr Leigh, Mr James Arbuthnot, currently chairman of the Defence select committee. It is he who so recently labelled the FRES project a "fiasco". Well, it seems it takes one to know one.