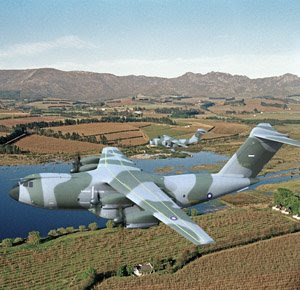 Yesterday, the Daily Mail was warning that the a customers' revolt could lead to the whole project being cancelled, with a break-point approaching on 1 April when the contract can be terminated in the event of non-delivery.

At this time, the only thing Airbus military has actually delivered is 28 colour photographs of the machine - all computer generated, for want of the real thing, which still has not left the ground.

The Times was also suggesting that the MoD would walk away from the project, and was looking at "alternative options".

However, after talks between the seven countries that ordered the aircraft on the sidelines of an EU defence ministers' meeting in Prague today, Reuters reports that customers have given the project a 100-day reprieve. They have thus agreed to postpone any decision on cancellation for three months from 1 April, during which period, "no state would take a decision without consulting the others".

With deliveries to the RAF possibly delayed until 2016, it is hard to see that 100 days will make that much of a difference, so it will be interesting to see what Airbus will do to make the UK change its mind about walking away.

The prospect had the Lord Pearson asking today in the Lords whether there was "any hope that the CargoLifter programme, the A400M, is thankfully slipping from postponement to cancellation", only for government spokesman Lord Davies of Oldham studiously to avoid answering the question and move on to another topic.

The government, however, is rapidly running out of options. With the bulk of the UK tactical transport fleet set to be grounded by 2012, it needs rapidly to look for alternatives, the most likely being the C-130J Hercules. In contrast with the euroweenies, Lockheed Martin have happily announced they have so far taken 257 orders and delivered 171, the euro-score being 180 ordered – none delivered.

Such is the popularity of the C-130J that the manufacturers are to increase the production rate from 12 aircraft a year in 2008 to approximately double by 2010. Lockheed Martin also says it is currently "in detailed discussions" with several countries about further orders. But, even with the increased rate of production, there is a backlog of 86 aircraft, which means that new orders cannot be accepted until well into 2012.

The government had better get its skates on, or it will be reduced to posting colour photographs of supplies to troops ... by overland mail.