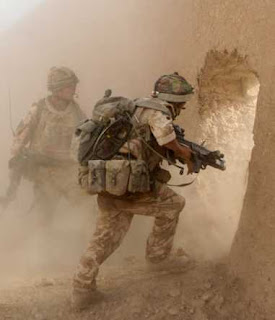 Ever since The Times set the hare running last Friday, with its report that "British Army chief ready to send 2,000 more troops to Afghanistan", there has been a rush of derivative stories speculating on this theme.

However, despite its misleading headline, proclaiming "Extra troops confirmed by Dannatt", The Independent report was closer to the truth, citing a "Downing Street spokesman" who said that a decision had not yet been taken. Crucially, though, the paper added as a tailpiece to its story, "There is a series of discussions to be had and they have a political dimension, a financial dimension and a military dimension."

That is indeed the case – the issue has all three of those dimensions. On the one hand, there is by no means unanimity within the military that extra troops are needed. Then there are grave concerns about the escalating costs of the campaign – costs which could only increase with an extra deployment.

And there are political reservations, not least as to whether existing troops are being deployed effectively. The concern is that the Army's activities are far from credible and that the call for more troops is simply a way of covering up for the ponderous and wasteful use of manpower.

Nevertheless, none of such subtleties trouble The Sunday Telegraph which headlines, "Defence chiefs battle Treasury over Afghanistan troop levels".

To be fair to Sean Rayment, the paper's defence correspondent, that is not actually what he writes, his report telling us that high ranking officials from Downing Street, the Foreign Office and the Treasury remain unconvinced that a so called "surge" in troop levels is the right strategy for defeating the Taliban in southern Afghanistan.

Only then are we told that "it is understood" that the Treasury is resisting calls to fund further troop increases in Afghanistan, and then we get the legend "even though General Sir Richard Dannatt, the head of the Army, and General Sir David Richards, who will take over as Chief of the General staff, fully support the move."

Roughly translated, this means that Rayment has been taking his briefings from sources inside the Army, who are anxious to have their band-aid of additional troops and, by such briefing, they also have their alibi if and when things go belly-up. If they don't get their additional troops, they can always blame "the Treasury" for their own failures.

The Army, however, is playing a silly game, not least because – as Rayment also reports, the briefings flowing out from the Army "are understood to have irritated senior Treasury officials" who felt they were being "bounced" into making a premature decision. If you mess with the Treasury, you lose.

By coincidence, we have an example of the profligate use of manpower in The Sunday Times today, with Mike Smith retailing – without a hint of criticism – the latest "derring do" by British troops.

British commandos, we are told, have hauled a two-ton artillery gun up a 130ft cliff by hand to protect a vital strategic outpost in Afghanistan, the 105mm gun having been dismantled and rebuilt at the summit of a rocky outcrop, known as the Roshan Tower, "using techniques traditionally demonstrated at the Royal Tournament." Even the ammunition was manhandled up the 400-yard track "which couldn’t take vehicles." 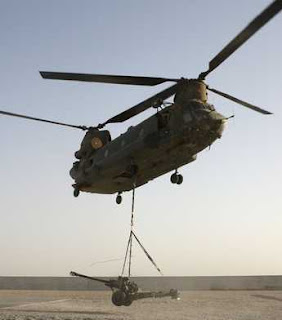 We are not told how many troops were thus employed, but the job most certainly could have been done faster and more economically by the use of a helicopter. A Chinook (pictured) or a Mi-8MTV would have found no difficulty in placing the gun.

There is, of course, the issue of whether there are enough helicopters, but if there are not enough to sustain current operations – leading to the wasteful use of manpower – putting more troops into theatre is hardly going to help. As to why there are not enough helicopters, that is an issue which has been endlessly rehearsed on this blog but, by and large, it is fair to say that the military is the author of its own misfortunes.

As to the campaign itself, Rayment gives us the benefit of his analysis offering the stunning information that, over the last 18 months the war has "gone asymmetric". The correct response to that is probably "no shit, Sherlock!"

Insurgents, we are told, are capable of striking at will almost anywhere in Afghanistan. The country's future has never looked more bleak and any sense that the Afghan war was a boy's own military adventure has now ended.

Now, with Miliband admitting that the war has reached "strategic stalemate", we are seeing a repeat of the Iraqi strategy of dumping the responsibility for security on the Afghanis, upping the ante on the hype and proclaiming another "victory".

Rayment thus cites Brigadier Mark Carleton-Smith, commander of 16 Air Assault Brigade, who now dismisses the notion of a military victory over the Taliban. "We 're not going to win this war," he says. "It's about reducing it to a manageable level of insurgency that's not a strategic threat and can be managed by the Afghan Army."

With something of a sense of understatement, Rayment suggests that this is "an immense undertaking." The ANA has virtually no air power, no armour, little artillery, no medical facilities, basic communications, poor transport and most of the recruits are illiterate. And, if possible, the situation is even worse with the Afghani police.

Yet, as with Iraq, an exit strategy is being constructed on the basis that, some time in the not too distant future, the ANA will miraculously transform itself into a modern army, capable of taking on the Taleban and beating it – the very thing the coalition forces have so far been unable to do.

Meanwhile, the ponderous British Army, in between rewriting history, is busy convincing itself that this is the master plan for another success. The only hope is that by the time it has managed to repeat its trick, we will have a new American president who will be prepared to energise the campaign in the same way that Bush did in Iraq.

Then we can see another repeat. As has the British Army handed over its Basra base to US forces this week, we can look forward to another glorious victory celebration when, in a few years time, they hand over to Camp Bastion to the Americans.