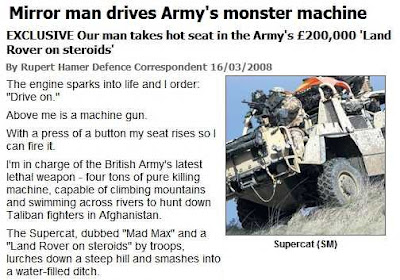 All it lacks are "go-faster" stripes down the sides but, short of that, it is every boy-racer's dream - a "Mad Max" monster machine that can tear around the countryside at the taxpayers' expense, all without a moment's thought about what it is supposed to achieve.

No matter that the thing is so dangerously vulnerable that the Taleban can probably scarce believe their luck. Simply give the supposedly hard-bitten hacks a chance to play with the new "toy" and their brains go gurgling out of their backsides. Instead, they are seized by an advanced attack of the Jeremy Clarkson syndrome, gibbering with delight at the thrills and spills.

No less than two such hacks have fallen prey to this syndrome this weekend, Rupert Hamer, defence correspondent for the Sunday Mirror and Sean Rayment, his counterpart on The Sunday Telegraph.

Interestingly, both claim "exclusives", obviously heedless of the fact that they have been recruited by the Army to deliver shameless "puffs" for its latest insanity, justifying a decision which beggars belief in its arrant stupidity.

Thus do we get Hamer burbling with child-like glee at "the British Army's latest lethal weapon - four tons of pure killing machine, capable of climbing mountains and swimming across rivers to hunt down Taliban fighters in Afghanistan." Sitting in the front passenger seat, he tells us, with unrestrained joy: "The Supercat (sic), dubbed 'Mad Max' and a 'Land Rover on steroids' by troops, lurches down a steep hill and smashes into a water-filled ditch…". 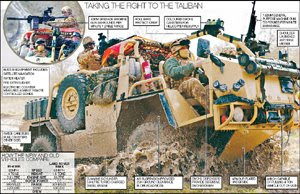 Rayment, for The Sunday Telegraph is similarly afflicted. With his story illustrated by a lurid graphic, he tells us that the object of his childhood fantasies is, "Fast, powerful and with a fearsome array of weaponry …". "It has already been named 'Pitbull' by the soldiers who will drive it deep behind enemy lines," he burbles.

Citing entirely uncritically, unnamed "senior officers", he allows them to say, "the vehicle will greatly enhance the fighting capability of their soldiers, and will save lives", adding that: "The vehicle and crew are protected against mines by reinforced armour plating but the military says its best defence is its manoeuvrability and speed."

The vehicles – as we know - are not protected against mines at all. Thus the value of this exercise (for the Army) is that when the body bags start coming home - which we know they must, the journalists will have been totally compromised. They will utter not a word of criticism of the vehicle when the death toll mounts.

This we have seen before with the Pinzgauer Vector, with Sean Rayment offering an apologia for the machine, so bland in its description that no ordinary person would begin to realise that something was badly amiss. 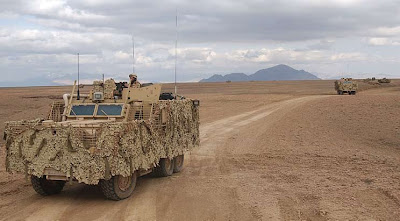 Interestingly – and very telling – we can recall none of these burbling boy racers offering similar eulogies for the Mastiff, or even querying the delays over the introduction of the Ridgeback. Yet, for all the glamour and excitement of the new "toy", the unsung Mastiff is proving itself perfectly adequate for many of the tasks which the Army require – as the above picture demonstrates. Extreme off-road performance is not always at a premium, nor even necessary on many occasions. 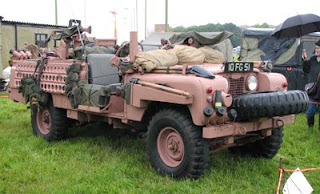 Going back to basics, this Supacat M-WMIK (now renamed Jackal - ed) was originally intended as a replacement for the "Pink Panther", the mobility platform for Special Forces. It was never intended a replacement for the WIMIK Land Rover, which itself is an unsatisfactory stop-gap, pressed into service to make up for the failure of the Army to get its act together and procure an updated armoured car.

Yet the one thing useful Rayment does is confirm our worst fears that this "four tons of pure killing machine" will replace "the ageing Land Rover WIMIKs." In this role though, it will indeed be a "killing machine" but it will be our own troops who do the dying.

There is something very wrong with a media which so lacks critical faculties that it falls so easily for Army "spin".