Bogged down in the mire 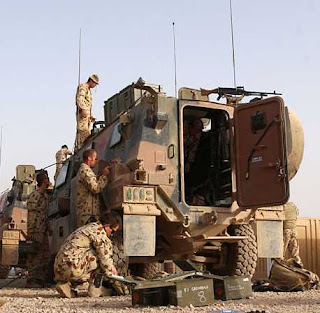 What started as a straightforward story of simple negligence is now getting hopelessly bogged down in a mire of recriminations, accusations and counter-accusations, with the point being missed completely.

According to Thomas Harding's latest report, Special Forces soldiers "tore their hair out" at being allocated "Snatch" Land Rovers, described as "flimsy vehicles", after Cpl Sarah Bryant and three of her male colleagues had been killed last June.

The source is hardly impartial, coming as it does Adam Holloway, albeit a former regular soldier but also a Conservative MP. Nevertheless, it is probably true, especially in the light of a report in The News of the World which does not seem to have been picked up by The Telegraph or the diligent Tory MPs.

This records that Major Sebastian Morley, at the centre of the current storm, was moved to resign not just by the Sarah Bryant incident but by a second attack on a "Snatch" Land Rover. This took place in September in Nadi-ali, west of Lashkar Gah. No troops were killed so the incident was not revealed by the MoD.

However, according to the NOTW account, as the four men inside struggled to get out, two with injuries, they came under fire from the Taliban. Coalition forces rushed to their rescue and another massacre was prevented. A senior military source said: "Morale was badly hit by the death of Sarah Bryant and her colleagues. But after this second incident people were asking why nothing was done."

The paper cites an "insider" saying: "The first one was tough but the second knocked everyone for six. We could have been sending home another four coffins. "Frankly, it's a miracle lives weren't lost again. It has forced Maj Morley — a good bloke well-liked by his men — to resign. He could see more lives being lost and felt he had to take a stand."

This source continues: "Time and again we've asked for better vehicles and the excuse is they aren't available. It has clearly cost lives."

Despite the current focus being on defence minister Quentin Davies, under fire from the Tories, the broader implications of this second incident, and the new timeline, adds a whole new dimension to the issue.

As we reported earlier, suitable protected vehicles had already been ordered and, had urgent steps been taken, they could have been in theatre well before June, in time to prevent Sarah Bryant and her colleagues being killed.

These were the Australian Bushmasters, the order placed in April and confirmed in May by the British High Commission in Canberra.

There is no question of these vehicles not being suitable as they are currently used by Australian Special Forces, who work in a very similar manner to their British counterparts, on whom they are modelled. The vehicles are currently in Afghanistan, with the Australian forces (pictured).

We further pointed out that, when the Dutch in Afghanistan ordered Bushmasters – which were delivered in October 2006, they negotiated to draw them from existing Australian Army stocks rather than wait for a new-build, the Australian inventory then being topped-up when the manufacturers had built what amounted to replacement vehicles.

Given that authorisation to purchase by the British government had been given in April, and the fact that the Australian Army holds large stocks of these vehicles, it seems inconceivable that, had a formal request been made, immediate supplies could not have been made available.

Even with transport (a few days by air freighter) and the fitting of radios and electronic counter-measures, there still seems no reason why these vehicles could not have been in service with British Special Forces well before the end of May, in time to protect Sarah Bryant and her escorts.

With the second incident occurring in September, it would now appear that these vehicles were not even in place on this extended timescale, which begs the question, where were they? And, for that matter, where are they now?

As to Mr Holloway's "evidence", given yesterday during questions from the Commons' Defence Committee on the state of the Armed Force to the chief MoD civil servant Sir Bill Jeffrey, we learn not only that an SAS commander was "pulling his hair out making urgent requests that they should not have to have 'Snatch' before they deployed to Afghanistan this summer," but the unit "despaired" after numerous requests were ignored with bosses telling them the Snatch was suitable for their task.

The substantive point here seems to be the identity of those "bosses", and the actions and inactions of those further up the chain of command. It is great sport, in which shadow defence minister Gerald Howarth is indulging, to pontificate that: "This is the second example in two days of commanders being denied equipment which they had requested."

However, his complaint that: "Quentin Davies has been extraordinarily cavalier about the requests that commanders have made from the field," is slightly wide of the mark - as indeed is his assertion that, "If he cannot fulfil the role of equipping them (the troops) properly then he should consider his position."

That is not in any way to defend Davies, but he was not in post when the Sarah Bryant or the second incident occurred. Furthermore, ministers may not even have been directly involved in the decisions which led to the "Snatch" Land Rovers being used. But they may have been involved in the decision to allow what seems to be a fairly relaxed timescale for the delivery of the Bushmasters, in which case we need to look elsewhere than Quentin Davies for where the fault lies.

The Tories, though, seem more concerned with gaining a ministerial "scalp" than they do with getting to the bottom of this murky affair, finding out what went wrong and why, and how best – and most expeditiously – the system should be fixed.

We did suggest earlier that defence was too important to be treated in the conventional party political manner yet it seems, once again, that Tory tribalism is taking precedence over securing a safer environment for our troops.

Ironically, if only the Tories could be more focused, the failures they identify could well be greater that those to which they have alluded. In that case, the prize could be an even bigger "scalp" than the very junior minister they are targeting.