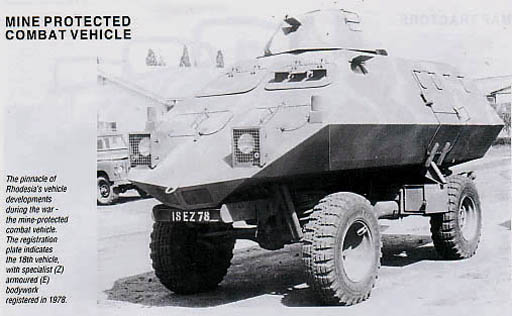 The photograph above shows a Rhodesian-built Mine Protected Combat Vehicle (MPCV). This model – one of 80 built – was fabricated on a standard commercial Unimog chassis and registered in 1978 – thirty years ago.

Although it never saw action, the MPCV represented the peak of Rhodesian anti-mine warfare development, the vehicle being built on a "modular concept" where different bodies could be fitted – the armoured car, in this case, but with provision for a turretless command vehicle and an ambulance.

One of the best features of the design, it was said, was its cross-country capabilities. Unlike most vehicles of this type built in Rhodesia, the MPCV was not continuously solid-mounted to the chassis. The capsule was fixed lengthways to each end, allowing the chassis to flex to its full capacity, giving the excellent off-road performance. This also helped cushion the vehicle from mine blasts. 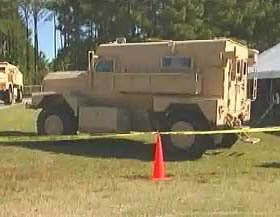 Thirty years on, as a private venture, the US armoured vehicle manufacturer Force Protection is building the 8-ton Cheetah, featuring the same basic technology developed by the Rhodesians.

In addition, this model is fitted with fully independent suspension, developed specifically to make the machine more agile and provide improved manoeuvrability on rocky, mountainous terrain.

One could say that the MRAP is coming of age, bridging the gap between the heavily armoured vehicle, safe only on well-constructed metalled roads, and the lightly-armoured all-terrain vehicle which offers good off-road performance but limited protection.

However, thirty years ago, the Rhodesians were already there. In the meantime, our military geniuses have been sitting on their well-padded backsides, dreaming their dreams of glory – while their men (and women) have died in lightly protected vehicles such as the "Snatch" Land Rover.

Someone, somewhere, should be shot. The trouble is, where do you start?