Not suitable for civvies 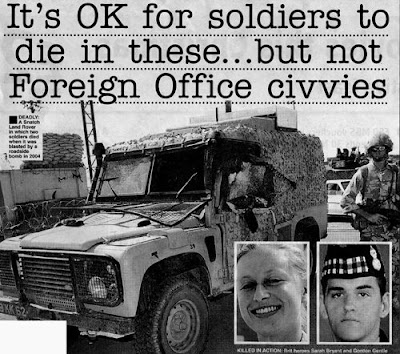 The Sunday Mirror is waxing indignant, with a piece about Snatch Land Rovers, under the headline (above): "Indefensible - pen-pushers banned from death-trap Land Rovers.. but they’re still OK for our heroes."

In an exclusive by Rupert Hamer, the paper's defence correspondent, the paper claims that civil servants in war zones are banned from travelling in flimsy Snatch Land Rovers... while soldiers are still dying in them.

The thrust of the story (with details from the print edition of the sister paper, The Daily Star) is that an edict was issued in November 2005 by Foreign and Commonwealth Office security manager, John Wyndham, prohibiting FCO and Department for International Development (DFID) staff from riding in Snatches. UK police and private training contractors were also prohibited from using the vehicles.

Apparently, Major General James Dutton, then commander, allied forces in south-easy Iraq had insisted on civil servants being allowed to ride in Snatches, but had been over-ruled by Wynham. Instead – or at least, so it is implied – these staff were provided with 50 "bombproof" Toyota Land Cruisers costing £3.2million.

Whether armoured Land Cruisers provide any more protection than Snatches is a moot point. Certainly, FCO staff have not fared much better than soldiers when they have been deliberately targeted. But, since there are some indications that insurgents were specifically targeting Snatches, just riding in another vehicle – any vehicle – could have made the different.

This notwithstanding, the piece adds to a growing body of evidence that the fatal vulnerabilities of the Snatch were well known at a very high level. Yet, despite that, they continued to be used and are still in use today. By our reckoning, 26 soldiers have died (of 38 in total) as a result of insurgent attacks on Snatches since November 2005.