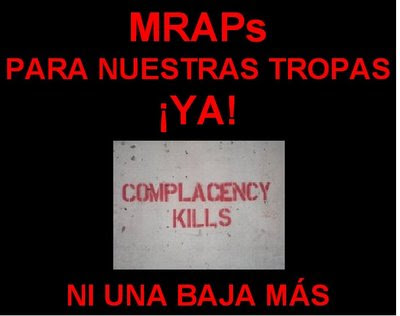 A Spanish defence blog records the deaths in Afghanistan last Sunday of two Spanish soldiers in a BMR armoured vehicle, after an IED attack. "An outdated vehicle designed and built in the '70s for other wars," it says, "A vehicle that turns into shrapnel when it receives a blast." It continues: 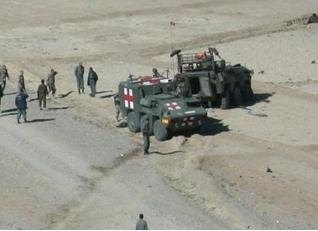 "While in the UK the battle of the Snatch has unleashed, here in Spain we are struggling to equip our Armed Forces with MRAP for over a year. Unfortunately the momentum of purchasing and commissioning of MRAPs for our troops languishing between our incompetence and a brutal budget cut for 2009. In one year we have only been able to deploy 17 MLV Lince. USA has deployed in one year and a half more than 10,000 to Iraq and Afghanistan getting thereby reduce its casualties in such attacks up by 80%.

The British Snatches are called mobile coffins. Here we have our private Snatch: BMRs, VAMTAC, and Anibal. All of them obsolete vehicles inadequate to protect our troops. Known fact that unfortunately has already spread among the Spanish troops to their distrust. Indeed it is well-known for our political and military leaders. Fact that some silent because discipline and others because of their moral misery. Well here we are not going to shut up."

Neither is this the first time Spanish peacekeeper have been killed in a BMR. In the incident pictured (below), Spanish Pundit reported a "premeditated" IED attack which "badly damaged two vehicles transporting Spanish peacekeepers from the UN Interim Force in Lebanon (Unifil) near the border with Israel." Six soldiers were (eventually) reported killed. 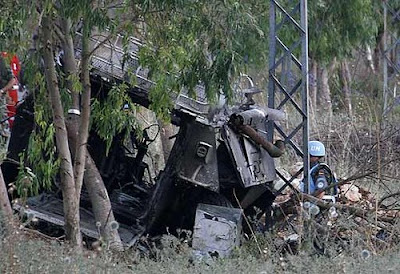 We should, of course, take note. Although the vehicle entered production in 1979, the type was upgraded in 1994, with new engines and additional armour fitted. The design concept, though, bears a general similarity to the Canadian LAV and the FRES eight-wheeled utility vehicles being considered for British forces.

However, as experience constantly demonstrates, it is not armour per se which offers the protection so much as the combination of armour and design. As we noted earlier, US Defence Secretary Robert Gates reported that crews were twice as likely to survive an IED hit in an MRAP than they were in a main battle tank. Given that even the heaviest MRAP has considerably less armour than an MBT, the influence of design is readily evident.

The Spanish government, it seems, is slow to learn the lessons. We do need to suffer the same misfortunes.