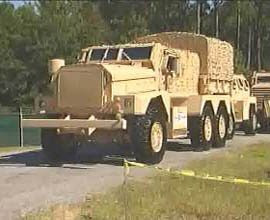 We learn from Bloomberg that Force Protection is "optimistic" about winning an initial order by early next year for their newly developed flatbed trucks, and anticipates an order for as many as 100 of the new vehicles.

This is the "Tactical Support Vehicle Heavy", or TSV - to be designated the Wolfhound in British service. And, as a testament to the private sector, it was actually designed in the past 90 days, derived from the company's Cougar troop transport.

One can imagine that, had the task been given to the MoD boffins – much as we love and appreciate them – they would still have been having discussions about the special dietary requirements for the design team and the colour of the pencils to use at the inaugural design committee.

As an aside, one wonders why one has to find out about these things from a financial news agency, when the type of equipment with which our troops are to be provided would – one would have thought – be of some concern to the media. There is, however, a Parliamentary Question in the works, seeking more information.

As another aside – an aside, aside, perhaps – we also wonder why we have to rely on a single picture of the vehicle, a video grab taken from a US news report, and heavily photoshopped to improve quality and remove wide-screen distortions. No hint of this "exciting" new product appears on the Force Protection web site, much less a photograph. Sometimes, this company is its own worst enemy. 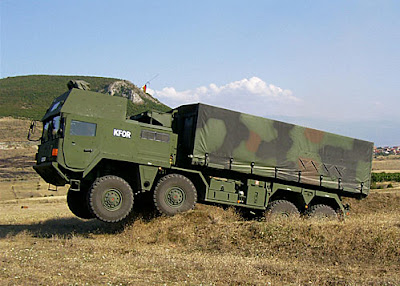 This notwithstanding, if the MoD are moving towards the Cougar flatbed, to fulfil the TSV requirement, it is good news. The alternative mooted is the MAN truck, providing anti-tank mine protection at STANAG level 3b (8 kg TNT midsize under-truck), roughly equivalent to the US MRAP I class (pictured above). This compares with the Cougar, rated as a MRAP Class II, providing 15 kg TNT equivalent protection.

The MAN truck may have better load-carrying performance – although, unlike the Cougar, the load bed is not protected – but in a dangerous environment like Afghanistan, we take the view that the design (and thus selection) should be optimised for protection rather than load carrying.

It is better, in our view, to have more vehicles with live drivers, than bigger loads on fewer vehicles, at the cost of dead drivers.