Let loose the dogs of chores 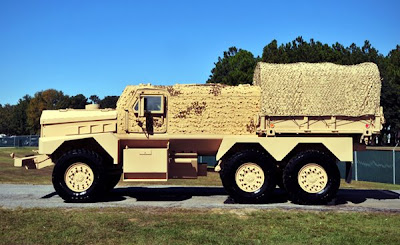 So far, reported only by one obscure (to me, anyway) online business site, the MoD has at last given some more details of its new £700 million armoured vehicle package announced by John Hutton last month.

This is the Tactical Support Vehicle (TSV) range – all given names from the canine genus, as has become customary in British Army armoured vehicle nomenclature. These, though, are to be the workhorses, doing the fetching and carrying and other chores, rather than fighting.

At the heavy end – very much as expected – we see the Force Protection Inc nominated at the preferred bidder with the Cougar flatbed. The MoD offers a photograph (above), which includes the vehicle being dressed up with the characteristic Barracuda Mobile Camouflage System (MCS) which we see adorning the Snatch Land Rovers and Vectors, so one might think that this is the final form, without bar or additional side armour.

However, once the wonks back home get at it, we could see it come out in a very different form. The MoD is, in fact, saying that it will be "up-armoured and integrated with UK specific equipment such as communications systems and protection measures in a similar way to Mastiff." 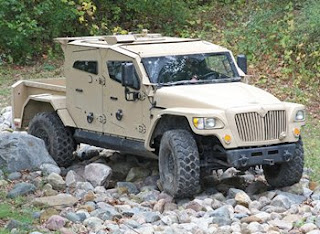 Less impressive is the nomination for the Husky – the "medium" vehicle. The preferred bidder is Navistar Defence with a vehicle based on the International MXT-MVA (pictured). As a cargo truck, it will have a four-man cab and a cargo capacity in excess of 1.5 tons. It will, however, come as three variants: utility, ambulance and command post.

This vehicle does not come with rave reviews. It is not a proper MRAP, with the classic v-shaped hull, but is a conversion built on an International MXT 4x4 pick-up chassis, with appliqué armour.

The last thing the Army needs is yet another truck type on its inventory. An alternative is the cargo version of the Bushmaster called the Copperhead. With the Bushmaster about to enter service with the special forces, there would be some commonality but, it appears, this is not to be. 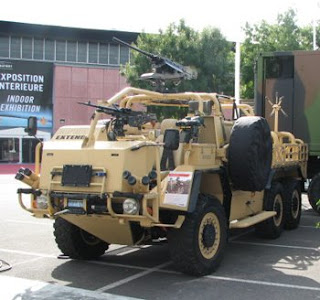 The third and least satisfactory of them all is the Coyote TSV (Light) which is to be a 6x6 derivative of the Jackal designed by Supacat Ltd. We are told that it will also have a cargo capacity in excess of 1.5 tons and a four-man crew.

The MoD does not offer a photograph of this, but it may well be similar to the Supacat "Extenda" seen in Paris earlier this year (pictured). There are no indications, as yet, as to whether this will be armoured in the same way as the Jackal but, if it is not, soldiers would be better protected going to war on bicycles.

The best thing that can be said of this vehicle is that it will share the same degree of vulnerability as its smaller cousin. Frankly, if the extreme mobility for which this vehicle is famed is really needed in the supply role, then the best option would not be a ground vehicle at all, but a helicopter or even – as was adopted by the LRDG in World War II - light aircraft (spool down to fifth picture).

Of this new package, John Hutton tells us the vehicles "will give the troops in Afghanistan the additional bite they need in the fight against the enemy. They do a formidable job and deserve nothing but the best." Despite these fine words, it is by no means clear that they (the troops) are about to get what they deserve.