When is a truck not a truck? 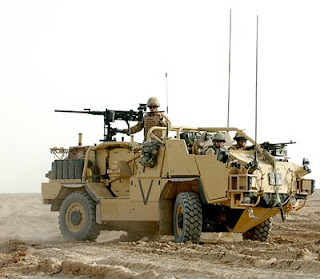 There is something quite bizarre about the MoD website's attempt to talk up the Army's boy racer Supacat M-WMIK, telling us in gushing terms redolent of a Boys' Own comic that: "Awesome firepower and agility puts Jackal in class of its own".

Never mind actually that the weapons fit is very similar to that found on a WWII SAS jeep – right down to the .50 calibre M2 machine gun – and is no different from the Land Rover WIMIK that this vehicle replaces. What is really staggering is the comment by Major Tom Wood, "part of the team that produced the vehicle", who says:

I don't think we, as an Army, have ever bought such an incredible piece of kit before. It packs as much power as some of our tanks!

If this represented the state of the knowledge of the Army, we would be truly worried. The Army currently has two tank types, the Challenger 2 which, apart from its two machine guns, fields a 120 mm main gun, and the Scimitar which is also equipped with two machine guns, plus a 30 mm Rarden cannon. Not even in their wildest dreams can the Army compare the armament of the M-WMIK with a tank. "Awesome" it is not.

Nevertheless, we can just about accept that the vehicle - which we must now learn to call the "Jackal" – "will mark a significant improvement on the capabilities of the current weapons platform" – in so far as it has enhanced speed, off-road performance and load-carrying capabilities. But what sticks in the craw is the fanciful description of "weapons platform". A truck is no longer a truck, it seems, when it is a "weapons platform". 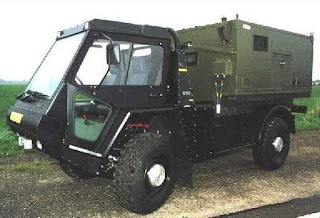 However much this is dressed up though, the "Jackal" is a truck – specifically a Supacat HMT 400 series high mobility truck. It has been stripped of its cab, fitted with roll bars and a machine-gun ring, plus an additional machine-gun mount, but it is still a truck.

In its original format, when it was introduced to a incredulous world last June, it lacked even basic armour, leaving driver and gunners completely exposed, far more so than they were in the Land Rover. It left one wondering how the Army could even contemplate fielding such a vulnerable vehicle.

Without any announcement to that effect, however, the Army has clearly had second thoughts about deploying a truck with less protection than a golf buggy. We see in the latest pictures the addition of sheets of armour which offer limited protection to the crew.

Thus, we now have a truck which has been stripped of its cab, fitted with roll bars and a machine-gun ring, and an additional machine-gun mount – plus bolt-on armour. But it is still a truck.

Furthermore, its empty weight has now increased from its original 4,700 Kg to 6,650 Kg, a hefty 41 percent increase – so it is now an over-weight truck. And, miraculously, according to the MoD, its performance is unaffected – with no mention of what nearly two tons of armour must do to its centre of gravity and stability. 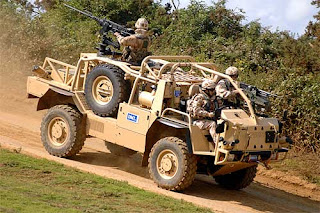 Yet, such is its amazing capacity for self-deception, that the MoD wants us to believe that this "Jackal" was originally designed as a "purpose-built weapons platform." It wasn't. The record shows that it was designed as a truck. It is a truck, with roll-bars, machine-gun mounts, and bolt-on armour. Who are they trying to kid?

Amazingly, the Army seems to be trying to kid itself. This truck with bolt-on armour, it tells us, incorporates "a fully-integrated protection system and reinforced armour plating," although it also tells us that the "Jackal's main defences are its mobility and agility." This makes the Jackal, we are told, "perfectly suited to the operational terrain of southern Afghanistan, where speed and manoeuvrability are essential."

Crucially though, the one thing its "fully-integrated protection system" does not include is any degree of mine or IED protection - against which "speed and manoeuvrability" is of rather limited utility.

And it is here, that the Taleban are directing their resources. Rather than confront the "awesome" firepower of the boy racers, Nato reports that their use of IEDs in Afghanistan has spiked dramatically in recent years - a staggering 2,615 roadside bombs were either detonated or discovered in 2007, up from 1,931 the previous year and just 844 in 2005.

No doubt the MoD will be quick to inform us of the effects of this awesome firepower on their new "fully-integrated protection system", when the Taleban prove to be somewhat less than impressed by MoD spin.