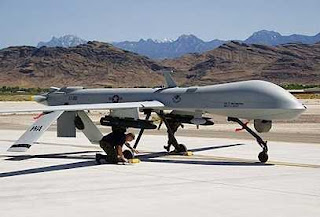 This is Robert Gates, US defence secretary, observing how difficult it is to get the USAF "old guard" to change its ways, and address the realities of fighting counter-insurgency campaigns in Iraq and Afghanistan. We know how he feels.

Reported by Reuters and others, he was addressing officers at the Air University at Maxwell Air Force Base, telling them that the US military needed more UAVs and equipment to collect intelligence and conduct surveillance in Iraq despite a big boost in those capabilities since 2001.

But, he said, he had hit resistance from inside the Pentagon, bumping up against the pilots' mafia (not his words). What he did say was that the Air Force's desire to use pilots for its missions has kept the Defence Department from employing more effective and lower cost unmanned aircraft.

"I've been wrestling for months to get more intelligence, surveillance and reconnaissance assets into the theatre," Gates complained, but … "Because people were stuck in old ways of doing business, it's been like pulling teeth. While we've doubled this capability in recent months, it is still not good enough."

The defence secretary had last week formed a task force in an attempt more quickly to find new ways to get those capabilities to Iraq and Afghanistan. Already, his group's findings, he says, may force the Air Force to replace pilots with unmanned aircraft on some missions.

Interestingly, he added that it may also force the Air Force to reconsider the type of aircraft it needs. "All this may require rethinking long-standing service assumptions and priorities about which missions require certified pilots and which do not," he told the group. He went on:

For those missions that still require manned missions, we have to think hard about whether we have the right platforms, whether for example low-cost, low-tech alternatives exist to do basic reconnaissance and close air support in an environment where we have total control of the skies.

The "low-cost, low-tech alternatives exist to do … close air support" was given less prominence in the various media reports but, with the US already funding the purchase of Super Tucanos for the Iraqi Air Force, one wonders if he has these – or something like it – in mind for the USAF.

What does come over though is that Gates (or his task force) is doing some sky blue thinking. He compares his new task force to the one that studied the military's need for more bomb-resistant vehicles, which led to the Pentagon's $20 billion program to speed mine-resistant ambush protected vehicles to Iraq last year.

On this, while no one can argue that the military is not staffed by a high proportion of skilled, dedicated and highly courageous personnel, there is always room for fresh thinking, especially as – almost by definition – the military hierarchy tends to be somewhat conservative.

That Gates is pushing new thinking can only be good, and his support for additional UAVs (and low-cost platforms) could lead to some welcome changes. As the man says, "Today we now have more than 5,000 UAVs, a 25-fold increase since 2001 … But in my view we can do and we should do more to meet the needs of men and women fighting in the current conflicts while their outcome may still be in doubt."

Very often, immersed in service politics, chiefs are more concerned with the standing and ambitions of their own particular services, rather than the specific needs to the personnel engaged in operations. It can thus take an outsider – like a politician – to remind them that the job comes first. Gates may have done just that.

Can we please see something similar this side of the pond?