It does not end there 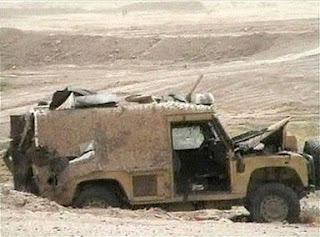 When it happened, on 4 September 2006, we called it criminal incompetence, sending troops out in lightly-armoured "Snatch" Land Rovers to a certain death if they were attacked by IEDs.

That is precisely what had happened to Gunners Stephen Wright and Samuela Vanua of 12 Regiment Royal Artillery. They were in a three-vehicle patrol comprising "Snatch" Land Rovers, passing through a built-up area near the town of Ad Dayr, 22 miles north of Basra City, escorting a Danish reconstruction team, when they were attacked. Both soldiers died.

Nor had they been the first. On 15 April 2006, Lieutenant Richard Palmer of The Royal Scots Dragoon Guards had been killed in the same area in the "Snatch" Land Rover he had commanded, hit by an IED while on a joint patrol with the Iraqi Army.

Furthermore, by the time the gunners were killed, The Guardian estimated that 23 troops had been killed in attacks involving "Snatch" Land Rovers, although the figure was probably higher.

On the deaths of Gunners Stephen Wright and Samuela Vanua, however, Oxford deputy assistant coroner Andrew Walker has now ruled that, had their patrol been issued with Warrior MICVs, they may well have survived the bomb, cementing in this blog's view that the "Snatch" Land Rover was wholly inappropriate for the level of threat to which troops were then exposed.

But, in so ruling, Walker was not entirely in tune with his fellow Oxford coroner, Selena Lynch. She held the inquest on the deaths of Pte Phillip Hewett, 2nd Lt Richard Shearer and Pte Leon Spicer who were also killed by a bomb attack on their "Snatch", on 16 July 2005 in al Amarah but then determined that she could make no recommendation to the MoD about the use of the "Snatches" because it was "beyond her jurisdiction".

Nevertheless, the case has been made in the al Amarah incident that the use of Warriors similarly would have saved the soldiers' lives, "Snatches" in this instance having been selected so as to minimise the antagonism to the local population.

Reported by The Daily Telegraph, the Army in this case argued that, while the patrol had requested the armoured vehicles, they were "needed elsewhere". Additionally, it was maintained that it would have been "impractical" for the tracked vehicles to constantly make the journey from the barracks at Shaibah, where the soldiers had been based, to their area of operations.

The Guardian gives more detail here, citing the soldiers' commanding officer, Major Marcus Tivey. He told the coroner that they "weren't really practical for the task" because of the distances involved, and kept breaking down. However, he also said that if the vehicles were available, because of the security they provided they would have been used.

Warrant Officer James Howitt, who was on the vehicle struck by the bomb, told the inquest that the Warrior "would have been perfect for that stretch of road", but considering the whole of the mission he would have used Land Rovers. He said officers constantly put in requests for Warriors, but superior officers were "very unminded" to give them the vehicles.

According to The Guardian the MoD said later: "The soldiers were in an appropriate vehicle for the task they were conducting and that's what their commanders and colleagues said at the inquest."

As to the "impractical" nature of the Warriors, the Army may have a point. At a rough estimate, it is over 30 miles from Shaibah to Ad Dayr – a round trip of perhaps 70 miles.

In an aggressive environment for which these vehicles simply were not designed, breakdowns were common and maintenance crews were heavily stretched. Using them for relatively long-distance trips like this, for which also they were not designed, could only have further reduced the availability of the fleet.

The tragic aspect of this incident, though, was that within weeks of the deaths, dozens of Mastiff and Bulldog armoured vehicles arrived in Iraq. The gunners had been due to receive ten of the mine-protected Mastiffs but they had arrived only after the regiment had left Iraq.

Therein lies the charge we made of criminal incompetence. As we recounted earlier, the Army had plenty of warning that the security situation in southern Iraq was deteriorating and had known for at least two years that the "Snatches" were not up to the job.

Yet, not only did the Army delay obtaining better-protected replacements, it actively resisted introduction of the Mastiffs into theatre. And this was despite the fact that, as a wheeled vehicle based on a commercial chassis as they are, they would have been well able to cope with the distances involved and would have been ideal in all other respects.

This issue, then, has not been resolved by coroner Andrew Walker. However, it does not end there. As recorded by Christopher Booker last week, Private Hewett's mother, Sue Smith, is set to sue the MoD for sending her son to his death in a "Snatch" Land Rover.

Booker, though, was also reporting that Sue had been frustrated by the Legal Aid Board, which was demanding from her a £5,000 contribution to the case, money which she simply did not have. Through the generosity of Sunday Telegraph readers, however, the money has been found, and the MoD – and through it, the Army - will be brought to account.

We will see then whether the arguments offered by the military stand up or whether, as we believe, the use of "Snatches" was indeed an example of criminal incompetence.