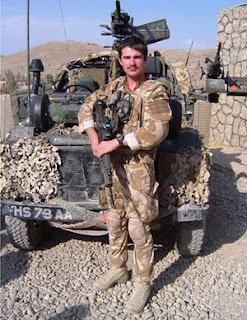 The MoD has released the names of the two Royal Marines killed in Afghanistan on Sunday. They are Lieutenant John Thornton and Marine David Marsh, both of 40 Commando.

Although the MoD website does not identify the vehicle involved, it does publish a photograph of Lt. Thornton standing in front of a WIMIK Land Rover. Separately, The Guardian and The Sun refer to the vehicle as a “Land Rover”, the latter paper showing a stock photograph of a WIMIK. The Guardian notes that the Land Rover, "with stripped-down sides and a machine gun," hit a roadside bomb or a mine three miles south of Kajaki. That paper continues:

There are many unexploded mines in Afghanistan, left over from previous conflicts. However, if, as expected, the two marines were killed by an improvised explosive device, it is the latest evidence that the Taliban are resorting to "asymmetric" tactics. Instead of continuing to mount conventional - and usually unsuccessful - attacks with rifles or rockets from vulnerable fixed positions, they are switching to roadside explosive devices or suicide bombers. "The Taliban have been having a terrible time, they are absolutely whacked," a senior British defence source said. That was why they were adopting new tactics.

Ironically, Lt. Thornton is on record giving an interview to the Dorset Echo about his experiences in Iraq in 2006. Then, in command of eight platoon of C Company, The Devon and Dorsets, he was extolling the virtues of "soft hat" patrolling, remarking: "If you walk around wearing a helmet it looks very aggressive, which is also part of the reason why we patrol in Snatch Land Rovers and not Warriors."

"Warriors have better protection, but again Snatches are less aggressive. People come up to you and say hello and are generally much more approachable," he said.

This is the classic Army line, no doubt drummed into every officer before he is allowed to speak to the media. And no doubt, the Taleban were highly appreciative that the WIMIKs too are "less aggressive" than properly protected vehicles. The trouble is that they had something more in mind than simply saying "hello".