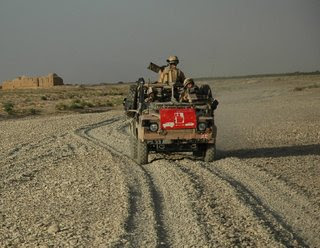 At the end of August, we reported the loss of an RAF Regiment WIMIK, with the death of one soldier and a civilian interpreter. Two others were injured.

This was the result of a mine/IED strike while they were patrolling the perimeter of Kandahar Airfield and now it looks like the Regiment has just suffered another loss under very similar circumstances.

Reported on the MoD site and in The Daily Telegraph and elsewhere, two RAF soldiers have been killed by "a roadside bomb" while on a routine patrol near Kandahar Airfield. All four men were treated at the scene and then evacuated to a nearby field hospital, but two did not survive.

The standard equipment of these patrols is the Land Rover WIMIK and there is no reason to believe that this patrol was equipped any differently. Pending confirmation of the vehicle type, we are minded to refer to our previous comments, the last time an RAF WIMIK was lost.

In Iraq, the RAF patrols are carried out in Mastiffs, where troops have survived similar attacks. That tells its own story.