Progress, but not good enough 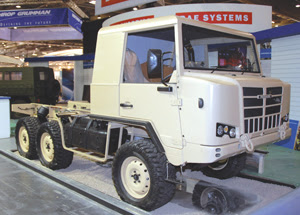 We're a bit behind the curve on this one, but we get there in the end – even if BAE Systems do not. Back in September last year, the company announced a new version of its Pinzgauer, imaginatively labelled the Pinzgauer II (pictured).

But, what caught our attention was a comment by one of our forum members who told us that the press notice referred to a "Mantis" option with the bonnet forward to improve mine resistance.

Curious, we checked this out and indeed, the press notice does announce a "new bonnet-out-front design called 'Mantis' which complements the more traditional cab-forward design." The new Mantis, we are told, "offers additional mine blast protection capability on top of the other new enhancements in the Pinzgauer II." 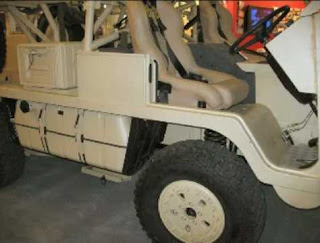 That it offers "additional" mine protection is an outrageous claim – which trading standards ought to investigate, instead of harassing market traders over non-metric scales, given that the existing range has no protection at all.

Nevertheless, we get Graeme Rumbol, who heads up BAE Systems Land Systems' Pinzgauer operations, claiming: "From the outset, the Pinzgauer II range has been designed with protection in mind. All variants can be supplied with a basic 'fitted-for' architecture which can then be customised with enhancements designed to defeat a range of threats. These include cover blast, ballistic and fragment specifications." 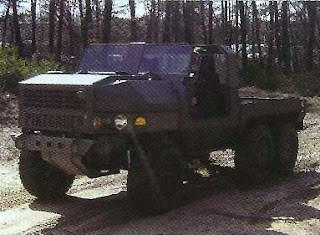 That also is outrageous. The basic Pinzgauer II range still has the driver positioned over the wheel arch – putting him in a highly vulnerable position – but we have managed to find a (rather poor) picture of the Mantis. And indeed, the "bonnet-out-front" design does put the driver well clear of the front wheels, giving him a chance of survival if the vehicle runs over a mine.

However, this does not give protection to any crew in the rear from delayed initiation mines or those with double or multiple impulse settings, rigged to explode under the second or subsequent wheel which passes over the mine.

Thus Graeme Rumbol's design with "protection in mind" extends only to drivers and front seat passengers, but not to gunners or crew in the rear. This is progress of a sort, but not good enough.